Search teams recovered the body of one worker in the rubble Sunday, bringing the death toll to three with a fourth person unaccounted for and presumed dead.

Crews worked from the outside in, peeling back layers of the plant searching for the last missing worker.

"Our firefighters are really working in some horrible conditions in there," said Waukegan Fire Marshal Steven Lenzi. "The entire building has collapsed in the areas we're trying to search now."

Search crews brought back cadaver dogs into areas deemed safe, but the process of going through the aftermath is a safety hazard in and of itself.

"Every time you cut a piece away, every time you pull a piece away, you have the possibility of further collapse," Lenzi explained. "We don't want to destroy any evidence that be under there, and we need to do it slowly and methodically, safely, for all personnel involved."

A representative for the company said the three men who did not escape were actively mixing products at the time. It appeared they knew something was wrong as workers who escaped the building said it was those three men who alerted the others to get out.

"Most of the processes they do are very non-hazardous. Silicone itself, non-hazardous substance," Lenzi said. "Something this weekend went horrifically wrong. That's what our investigation will come up with."

Friends are remembering Allen Stevens, who died Saturday from burns he sustained when a silicone factory in Waukegan exploded Friday night.

Nine people were in the building at the time of the blast. Four people were transported to the hospital, including 29-year-old Allen Stevens, who died Saturday from burns he suffered in the explosion.

"If you met Allen, you loved him. I didn't know anybody who didn't like the guy," said Jerry Kevek, victim's friend.

Kevek first met Stevens seven years ago. Stevens was initially rescued after the explosion and airlifted to Loyola Hospital's burn unit, where he died.

The other victims have not been identified. Autopsies on the two recovered bodies were conducted Monday. The Lake County Coroner said they are using dental records to identify them, and will likely not release their names until Tuesday morning.

A stainless steel vessel containing a chemical process is the focus of pinpointing a possible cause.

"As a process can fail, it was an explosion," said Lenzi. "There was no fire that caused it, there was something building up in one of the processes that then went wrong."

Officials could not say if hydrogen played a role. They have not ruled it in or out.

Officials said the explosion appears to be accidental and an investigation into the exact cause will take at least a month. Autopsies on the two bodies recovered are scheduled for Monday.
Some nearby businesses remained closed Monday because of damage from the blast.

Cell phone video from Friday shows flames and huge plumes of smoke at AB Specialty Silicones in Waukegan. The explosion was felt and heard across Lake County.

"The house shook and it felt like there was an earthquake," one resident said.

The search will resume Monday for one person still missing following the deadly explosion at a silicone plant in Waukegan.

"I'm just real heartbroken for the families because I work in warehouses a lot and we deal with a lot of chemicals at times in different warehouses, so it is a scary thing," said Jared Booker, who works at a nearby plant.

Antonio Mitchelle from Grayslake made a personal stop at the explosion site to pray.

"It really began to touch my heart about the loss and the people," he said.
Report a correction or typo
Related topics:
lake countywaukeganexplosion
Copyright © 2020 WLS-TV. All Rights Reserved.
RELATED 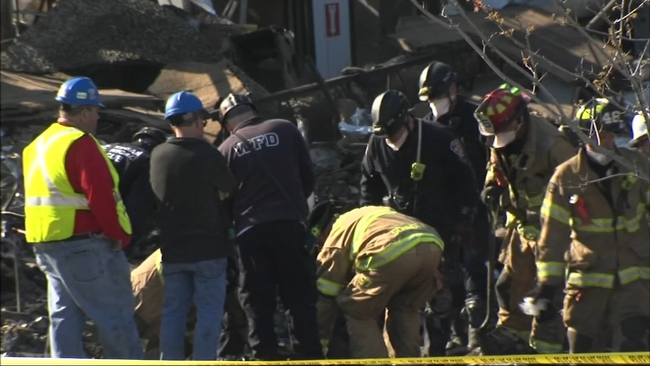