Why scientists want to fight California fires with more fires 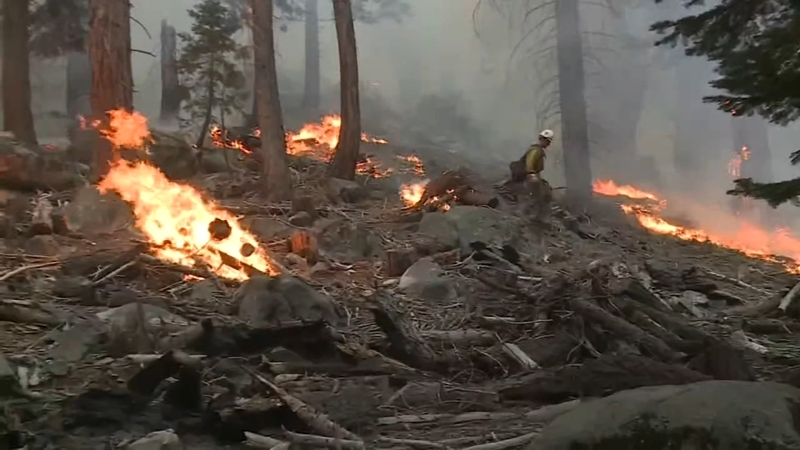 BERKELEY, Calif, -- The intensity and rapid spread of the wildfires in California this year is alarming fire scientists.

To combat the dangerous trend of escalating wildfires, some of those scientists think it's time to fight fire with fire. They're calling for more prescribed burns.

Dangerous fires are nothing new to California. Back in 1984, 50 homes and two hotels burned down in Tahoe City. But in 2021, the fires are burning like never before.

Fires this year have twice crested the Sierra Nevada, burning at high elevations over granite peaks with sparse vegetation, and that is stunning to fire scientists.

Crystal Kolden is a fire scientist at UC Merced.

"We are not able to contain these supercharged fires that are feeding off these climate change-induced conditions, and we need to start approaching these fires very differently," she said.
Fire scientists are advocating fighting fire with more fires - ones that are purposefully set.

VIDEO: CAL FIRE explains why Caldor Fire is moving so fast, sometimes jumping a mile at a time

CAL FIRE explains why Caldor Fire is moving so fast, with flames often jumping a mile at a time.

UC Berkeley fire scientist Scott Stephens explains, "We can do some burning in the winter, but we need a workforce to do that. Right now we have no work force to do that. Firefighters are hired just for the fire season. But there is talk in Congress to change that to have year round kinds of resources. And we can do aerial ignition. "
Kolden added, "What the science tells us, is we need more of the type of low intensity fire that California landscapes evolved with. Having 1,000 fires going across the state, really small, only a day or two, producing a much smaller amount of smoke."

But off-season controlled burns could mean Californians learning to live with levels of smoke in the air year round. The density of trees and fuel on the ground also have to be addressed.

Stephens predicted, "My back-of-the-envelope calculation says we need to do 10 times more acreage per year in mitigation than we're doing now because we're just not making a difference. We may have a prescribed fire training center coming to California someday. That's in legislation both state and federal. And then we also need more capacity to do the restoration thinning and to sell some of those products and break even on the costs. "

Fire scientists warned If we don't change the fundamentals, which is the structure of the state's forests, we are not going to get out of this hole. They say, "It's the only way forward."
Report a correction or typo
Related topics:
sciencecaliforniacalifornia wildfiresweatherwildfirefire safetycaldor fireuc mercedclimate change
Copyright © 2021 KGO-TV. All Rights Reserved.
TOP STORIES
FOP pres. posts video after ordered not to talk about vaccine mandate
Man, 55, shot in Wicker Park amid robbery attempt near 6 corners
Mom delivers 14 lb. baby after suffering 19 miscarriages
Funeral held for 4th Chicago firefighter to die from COVID
Heaviest pumpkin in US disqualified for crack
4 hurt after Amtrak train collides with semi car hauler: VIDEO
State trooper hit by DUI driver on I-90, police say
Show More
Pritzkers made $5.1M last year, tax records show
Chicago Weather: Clear skies, chilly Saturday night
Pritzker delays vaccine deadline for some state workers
COVID tops cause of death for police for past 2 years
Chicago's 'must stop' Mexican restaurant is more than tacos
More TOP STORIES News