20 dead in crash of limo headed to a birthday celebration in Schoharie, New York 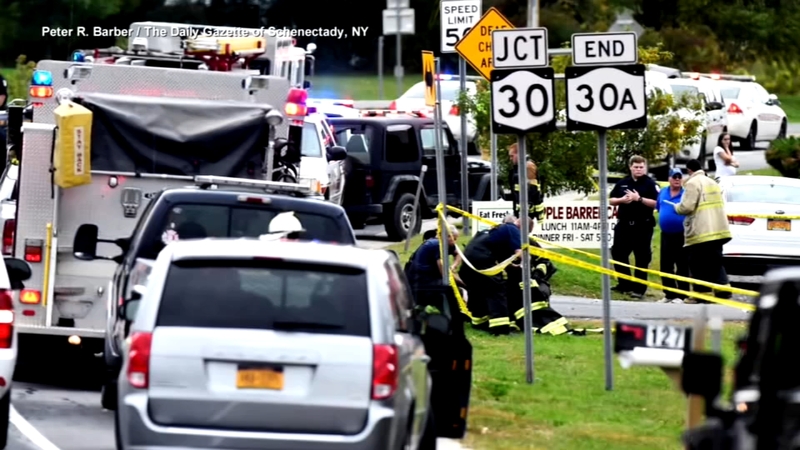 SCHOHARIE, New York -- A limousine carrying four sisters, other relatives and friends to a birthday celebration blew through a stop sign and slammed into a parked SUV outside a store in upstate New York, killing all 18 people in the limo and two pedestrians, officials and victims' relatives said Sunday.

The weekend crash was characterized by authorities as the deadliest U.S. transportation accident in nearly a decade. The crash turned a relaxed Saturday afternoon to horror at a rural spot popular with tourists viewing the region's fall foliage. Relatives said the limousine was carrying the sisters and their friends to a 30th birthday celebration for the youngest.

"They were wonderful girls," said their aunt, Barbara Douglas, speaking with reporters Sunday. "They'd do anything for you and they were very close to each other and they loved their family."

Douglas said three of the sisters were with their husbands and she identified them as Amy and Axel Steenburg, Abigail and Adam Jackson, Mary and Rob Dyson and Allison King.

"They did the responsible thing getting a limo so they wouldn't have to drive anywhere," she said, adding the couples had several children between them who they left at home.

State police say the limousine in an upstate New York crash that killed 20 people failed to stop at an intersection.

The 2001 Ford Excursion limousine was traveling southwest on Route 30 in Schoharie, about 170 miles (270 kilometers) north of New York City, when it failed to stop at 2 p.m. Saturday at a T-junction with state Route 30A, State Police First Deputy Superintendent Christopher Fiore said at a news conference in Latham, New York.

It went across the road and hit an unoccupied SUV parked at the Apple Barrel Country Store, killing the limousine driver, the 17 passengers, and two people outside the vehicle.

The crash "sounded like an explosion," said Linda Riley, of nearby Schenectady, who was on a shopping trip with her sisters. She had been in another car parked at the store, saw a body on the ground and heard people start screaming.

The store manager, Jessica Kirby, told The New York Times the limo was coming down a hill at "probably over 60 mph." In an email to The Associated Press, she complained that the junction where the crashed occurred is accident-prone.

"We have had 3 tractor trailer type trucks run through the stop through our driveway and into a field behind the business," Kirby wrote. "All of these occurred during business hours and could've killed someone then."

She added that the state Department of Transportation has banned heavy trucks from the intersection but there are constant smaller crashes. "More accidents than I can count."

The National Transportation Safety Board is investigating.

"This is one of the biggest losses of life that we've seen in a long, long time," NTSB Chairman Robert Sumwalt said.

And it appears to be the deadliest land-vehicle accident since a bus ferrying nursing home patients away from Hurricane Rita caught fire in Texas 2005, killing 23.

At the news conference, Fiore didn't comment on the limo's speed, or whether the limo occupants were wearing seat belts. Authorities didn't release the names of the victims or speculate on what caused the limo to run the stop sign. Autopsies were being conducted.

Speaking through tears on the telephone, Valerie Abeling said her 34-year-old niece Erin Vertucci was among the victims, along with Vertucci's newlywed husband, 30-year-old Shane McGowan.

"She was a beautiful, sweet soul; he was too," Abeling said.

The couple was married in June at a "beautiful wedding" in upstate New York, Abeling said. "They had everything going for them."

Vertucci, who grew up in Amsterdam, New York, was an administrative assistant at St. Mary's Healthcare in Amsterdam, Abeling said.

The vehicle was an after-market stretch limousine, according to an official briefed on the matter who spoke on condition of anonymity. The official was not authorized to discuss an ongoing investigation publicly and thus declined further identification.

Safety issues on such vehicles have arisen before, most notably after a wreck on Long Island in July 2015 in which four women on a winery tour were killed. They were in a Lincoln Town Car that had been cut apart and rebuilt in a stretch configuration to accommodate more passengers. The limousine was trying to make a U-turn and was struck by a pickup.

Limousines built in factories are already required to meet stringent safety regulations, but when cars are converted into limos, safety features are sometimes removed, leading to gaps in safety protocols, the grand jury wrote.

On Sunday, New York's senior U.S. Sen., Chuck Schumer, noted he asked NTSB to toughen standards after the 2015 crash. "I commend the NTSB's immediate aid on scene and am very hopeful that we will have concrete answers soon," Schumer said.

Limousine accidents remain rare, according to NTSB data. They accounted for only one death crash out of 34,439 fatal accidents in 2016, the last year for which data is available.

Cuomo on Sunday released a statement saying, "My heart breaks for the 20 people who lost their lives in this horrific accident on Saturday in Schoharie. I commend the first responders who arrived on the scene and worked through the night to help ... I have directed state agencies to provide every resource necessary to aid in this investigation and determine what led to this tragedy."
Report a correction or typo
Related topics:
traffic fatalitiesu.s. & worldaccidentcrash
Copyright © 2021 by The Associated Press. All Rights Reserved.
TOP STORIES
DaBaby dropped from Lolla lineup due to recent homophobic comments
44 shot, 4 fatally, in weekend gun violence: Chicago police
Fauci warns 'things are going to get worse' with COVID
Mayor pushes for more vaccinations to avoid another shutdown
Lollapalooza to wrap up as one of city's largest events since pandemic
120 laid off by Chicago's Morton Salt company
Boy, 14, dies days after shot twice in the head while in parked car
Show More
Illinois to open reservations for controlled pheasant hunt
Chicago Weather: Mostly clear, pleasant Sunday night
24K gold tequila bottle sells for $300
Chicago, Cook Co. announce 'universal' indoor mask guidance
Saturn will glow brightly in the sky this week: How to see it
More TOP STORIES News