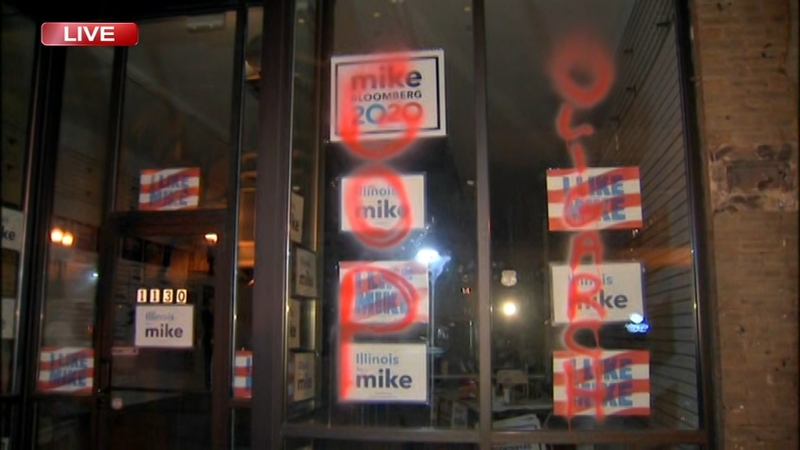 Police are still investigating and it does not appear the two cases are related, except in giving another glimpse into the political tensions that this presidential election is causing.

"Obviously it has no place in our discourse or in democratic politics," said Scott Britton, Cook County Commissioner and Illinois co-chair of Bloomberg 2020.

But it was some of the other graffiti, specifically the world "oligarch," that had the Bloomberg team pointing the finger at the current Democratic front-runner, Bernie Sanders.

"I know that the Sanders supporters are fervent," Britton said. "I love their energy. It's great for all Democrats, but there's a line that clearly has been crossed and it needs to be taken back and it needs to come from the national campaign, including the senator himself."

The Sanders campaign did not respond to requests for comment, but oligarch is a term he and his staffers have frequently used to attack Bloomberg, the billionaire New York businessman who has poured hundreds of millions of his personal fortune into the race already.

Last week, the East Lakeview office of a political action committee supporting Amy Klobuchar was vandalized with racist and anti-Semitic graffiti, including one that said "career politician."

"I don't think it was specific anti-Klobuchar animus that's responsible for this, I just think people are, like I said, tensions are high and political candidates, it's easy for them to be an outlet for people to express their frustrations," said Joshua Kilroy, of Midwesterners for Amy Klobuchar PAC.