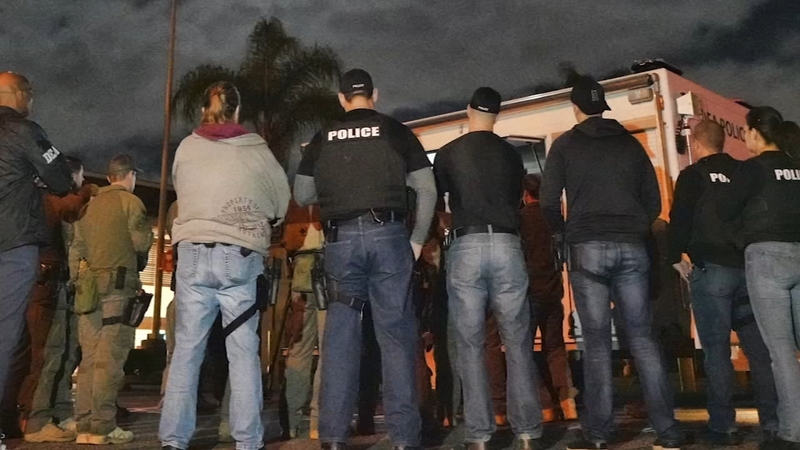 CHICAGO (WLS) -- Federal authorities in Chicago have gone for the jugular of the city's consensus Public Enemy No. 1, El Mencho, arresting 50 of his operatives here.

The Justice Department and the Drug Enforcement Administration Wednesday pulled back the curtain on Project Python, a sweeping investigation of the Cártel de Jalisco Nueva Generación (CJNG, or New Generation cartel) that controls a majority of street drugs sold in Chicago.

The 50 drug suspects arrested by agents from the DEA-Chicago Division are among more than 600 CJNG associates picked up in nationwide sweeps.

Chuck Goudie and the I-Team learn the identity of a new public enemy number one during an exclusive interview with city's new top drug agent.

As the ABC7 I-Team first reported nearly two years ago, Nemesio Ruben Oseguera Cervantes, known as "El Mencho," is the largest target for the DEA and considered within law enforcement ranks to be Chicago's most wanted fugitive and it's Public Enemy Number One.

El Mencho was named Wednesday in a new federal racketeering indictment that cites "numerous acts of violence, including murders, assaults, kidnappings, assassinations, and acts of torture" by the New Generation cartel.

"CJNG is recognized as one of the five most dangerous transnational criminal organizations in the world," DEA Chicago Special Agent in Charge Robert J. Bell said. "In Mexico, CJNG has used extreme violence, extortion and bribes to steadily expand control of the drug trade. CJNG is one of the two most prolific transnational criminal organizations trafficking huge quantities of illegal drugs to the Chicago Division - Illinois, Indiana and Wisconsin. Project Python is a coherent effort to focus national efforts on the drug plague CJNG spreads. DEA will continue aggressively working with its federal, state and local partners to make Illinois, Indiana and Wisconsin inhospitable places for the CJNG."

Chuck Goudie and the ABC7 I-Team have learned that Ruben Oseguera Gonzalez, aka "Menchito," was brought to the U.S. on Friday.

Also as the I-Team recently reported, Mencho's son Ruben Oseguera Gonzalez, also known as "Menchito," and a daughter Jessica Johanna Oseguera Gonzalez are both being held in the United States on drug cartel related charges.

"Project Python is the single largest strike by U.S. authorities against CJNG, and this is just the beginning," said Acting Administrator Uttam Dhillon. "This strategic and coordinated project exemplifies DEA's mission: to disrupt, dismantle, and destroy drug trafficking organizations around the world and bring their leaders to justice. Today, DEA has disrupted CJNG's operations, and there is more to come as DEA continues its relentless attack on this remorseless criminal organization."

"Project Python marks the most comprehensive action to date in the Department of Justice's campaign to disrupt, dismantle, and ultimately destroy CJNG," said Assistant Attorney General Brian A. Benczkowski of the Criminal Division. "When President Trump signed an Executive Order prioritizing the dismantlement of transnational criminal organizations, the Department of Justice answered the call and took direct aim at CJNG. We deemed CJNG one of the highest-priority transnational organized crime threats we face. And with Project Python, we are delivering results in the face of that threat for the American people."

CJNG is considered among the most prolific methamphetamine producers in the world. It is responsible for a significant proportion of drugs entering the U.S. according to federal drug agents, and responsible for huge spikes in Mexico violence.

While Wednesday's first official disclosure of Project Python comes as a blow to the New Generation cartel, and has undoubtedly put a dent in the cartel's American drug business, with leader El Mencho still on the loose in Mexico the organization is expected to move forward. The U.S. Department of Treasury has designated El Mencho as a "specially designated narcotics trafficker" and U.S. Department of State officials have issued one of the largest narcotics bounties ever, $10 million, for El Mencho's arrest.