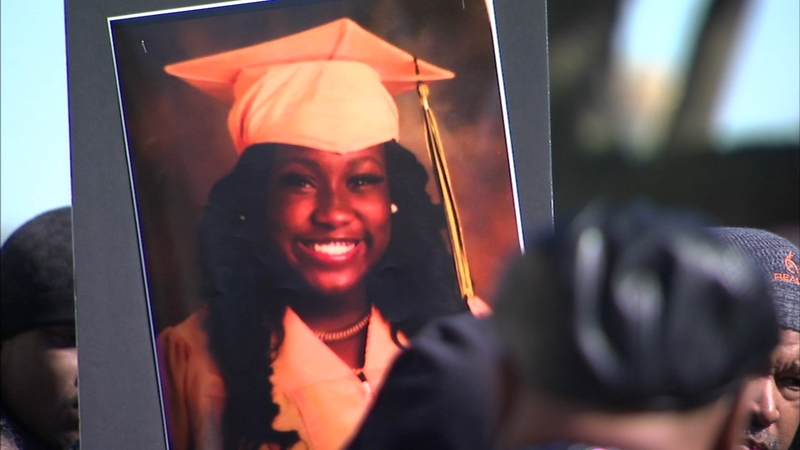 CHICAGO (WLS) -- The family of a nursing student fatally shot at a food mart on Chicago's South Side is asking the community to help catch her killers.

Along with grief, there is anger as the family and friends of 18-year-old Jaya Beemon call for justice.

Beemon, a nursing student at Malcolm X College, was shopping at a food mart in the Avalon Park neighborhood when she was shot and killed on Tuesday.

Police said three shooters walked up to the store in the 7900 block of South Avalon Avenue, looked inside and opened fire.

"A young lady that is doing the right thing, got all the potential in the world, the hopes and desires and dreams of a family, can be shot down like a dog," said Demetrius Nash, Beemon's cousin.

The Avalon Park community said they're not only deeply saddened by the loss of what they call their shining light, but also disgusted with how the teen's mother was treated by the Chicago police officers. Police said officers were trying to clear the emergency room when Nyisha Beemon allegedly struck and kicked an officer.

Chicago police released raw surveillance video of the shooting that killed a nursing student and injured four others.

She was arrested and charged with misdemeanor battery and misdemeanor resisting/obstructing an officer.

"I passed out when I saw my baby, was dragged like a dog and went to jail," Nyisha Beemon said.

Jaya Beemon was studying to be a nurse just like her mother and aunt when she was killed Tuesday night.

She was killed after she and a date stopped at a convenience store at the corner of 79th and Avalon Ave. for snacks.

"Treated like a criminal from the Chicago Police Department. That's not so, that's not right. We want an apology," said Janis Pass, a relative.

CPD officials are looking into the circumstances of the arrests.

Meanwhile, investigators have released the store's security camera footage of the suspects, but to no avail.

"Please do not fail us again. Find these killers. Find these vicious scum of the earth savages who viciously murdered by innocent niece," said Beemon's aunt, Tiana Beemon.

The family and their supporters said they want the community to step up leads to police.