Chicago 'Back the Blue' rally in Jefferson Park draws hundreds of supporters, counter-protesters 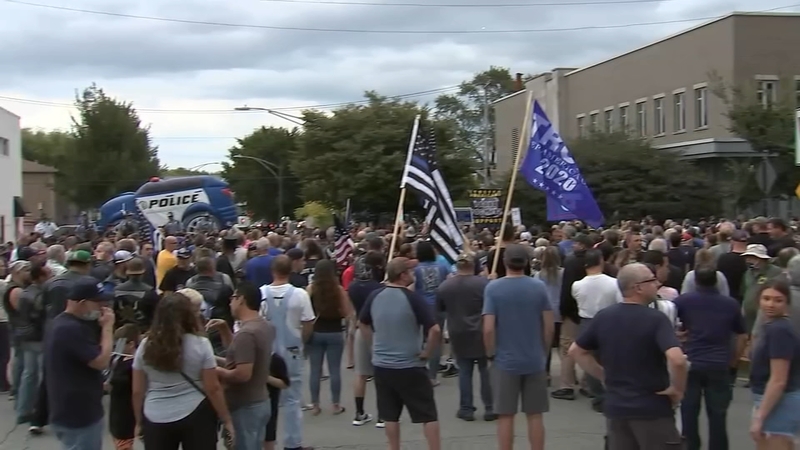 CHICAGO (WLS) -- Hundreds of people, many not wearing face masks, gathered at a "Back the Blue" rally in Jefferson Park Wednesday evening. A group of counter-protesters were also there.

The network of support for the Chicago Police Department runs deep, especially on the city's far northwest side.

"The numbers are proving that there are more people who support and love the police, and value the service they provide our communities," said Monica Barsamo, wife and mother of police officers.

Families and defenders said it's been a grueling stretch, starting with the COVID-19 pandemic, and weeks of 12 hour shifts with no days off amidst a summer of protests and unrest.

"There's a lot of stuff going on with hatred to the police," said Joe Carr, "Back the Blue" supporter. "Killing the police, hurting the police when they're out there protecting the safety of the public."

Counter-protesters who came to the rally pointed out that policing is a job, and criticism of police departments is fundamentally different than protesting police killings of Black people.

"What is a blue life?" questioned Clyde McLemore, president of Lake County Black Lives Matter. "They can go home and take them suits off. I can't take this Black off."

Hundreds of thousands of people have rallied in the streets this summer, arguing against and demanding accountability for what they say is say is systemic racism in policing.

That divide once again bore out in the street outside a Jefferson Park police station.

Meanwhile, the Chicago Police Department is locked in a fight with the city for a new contract they say is long overdue.