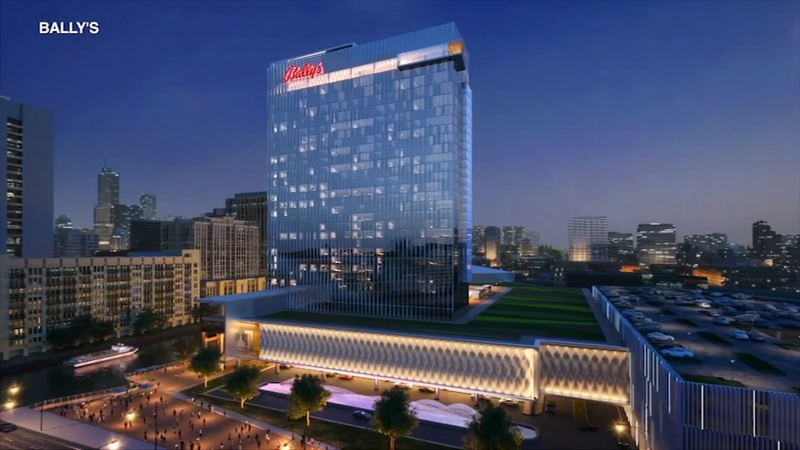 Mayor pushes back on reports Bally's is Chicago casino frontrunner

CHICAGO (WLS) -- Mayor Lori Lightfoot pushed back on reports from multiple news outlets that the Bally's proposal at the Tribune printing site will be Chicago's first casino.

Lightfoot said the committee tasked with evaluating all three casino bids has not yet completed its work.


The nearly $2 billion proposed project located at Chicago and Halsted is the frontrunner for the city's casino according to reports from the Chicago Sun-Times, Chicago Tribune and Crain's. All cite sources saying an announcement could come soon.

But Lightfoot pushed back on those sources.

"The reporting today in advance of even the evaluation committee meeting and making a recommendation to me, that's just not accurate," she said Tuesday.
The committee is led by Alderman Tom Tunney, and is tasked with vetting all three proposals for the Bally's Tribune site, Rivers 78 in the South Loop, and a Hard Rock Casino that would be near Soldier Field.

The committee has only met once.

"If it ends up being Bally's, and it ends up as the result of a corrupt, secretive process, I think it's fair to say the residents of the north side will feel betrayed by this mayor," said 2nd Ward Alderman Brian Hopkins.

"We've tried to be as transparent as we possibly could be with a number of rounds of engagement," Lightfoot said.
SEE MORE | Chicago casino could worsen problem gambling, Chinatown leaders worry


Across the street from the proposed Bally's site is a park with a playground that is popular with families. Many neighbors are upset at the idea a casino could soon be there.

"This is a very residential neighborhood, and you put a casino in it, and all of a sudden you're going to get all the traffic and all the noise," said Jeff Fine, River North resident.