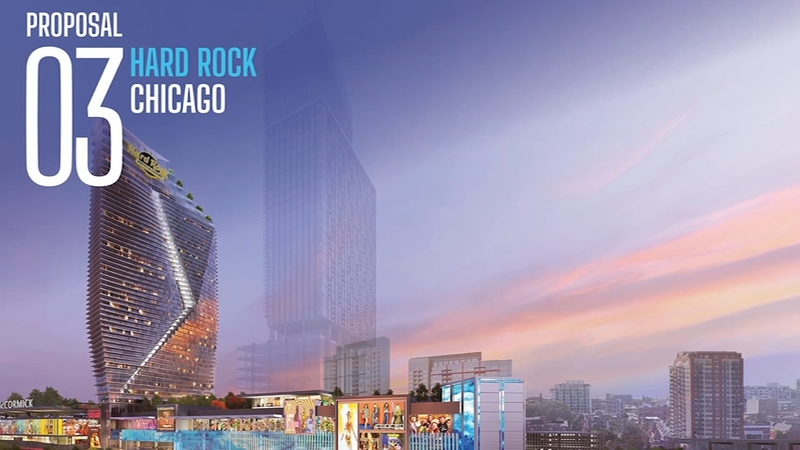 CHICAGO (WLS) -- The shortlist for Chicago's first casino is now down to three.

A special committee of aldermen made up of committee chairs and vice chairs will help make the final choice, expected to be announced this summer.

With the casino comes the prospect of hundreds of millions of dollars in annual gambling income.

"The location is key because you want to capture some of the tourist trade without cannibalizing conventions or threatening what they're trying to do at McCormick Place," said 2nd Ward Alderman Brian Hopkins. "So that really narrows the sweet spot for how we pull this off. I think we're going to have a very robust debate over the three finalist.

The Hard Rock Chicago would be built right near Soldier Field. The Bally's Tribune proposed site is along the river by Chicago Avenue. And the Rivers 78 site would be part of a planned development along the river near Clark and Roosevelt.

That one is particularly exciting for the owner of Emeche Cakery and Café in Bronzeville, who is part of that bid and would be able to open a second location in the casino if it ends up winning.

"But what it means for us is, you know, another location, job creation and just access to more people, and being able to share our passion with others," said owner Janell Richmond.

The two locations eliminated included on that would have converted the Lakeside Center at McCormick Place into a casino, and another that would have been built in the truck marshaling lot just south of there.

The city's analysis suggested those locations would hurt the convention business, determining, "Losing even one convention due to a casino could have significant adverse impacts on city and state revenues."

"We absolutely have to get this right. It's essential. Not only do we need the money, but we need to do it in a way that's respectful for the tourism industry, for the local residents. We can't go back and decide 10 years from now we did it wrong and rebuild a casino," Hopkins said.

A spokesman for the developers behind Rivers Chicago McCormick released a statement about the decision, saying, "We were proud to present a casino proposal that brings the most value to taxpayers - more than $1.5 billion taxpayer benefit over all other bids - by investing in a publicly-owned space. While we are disappointed this proposal was not selected to move forward, we want to thank the City of Chicago and MPEA for their consideration. We wish the eventual winner and the city at large great success, as Chicago's first casino will be a destination for all to enjoy and a revenue generator for local governments."

The Bally's proposal is already raising some concerns with the chairman of Chicago's Black Caucus.

"So as I understood it, in their proposal, minority owners would be bought out at a predetermined cost at a time now determined by them," said 28th Ward Alderman Jason Ervin. "We don't believe that's fair, does not represent the values of our city."

The estimated $200 million in annual income for the city would be earmarked for pension debt.