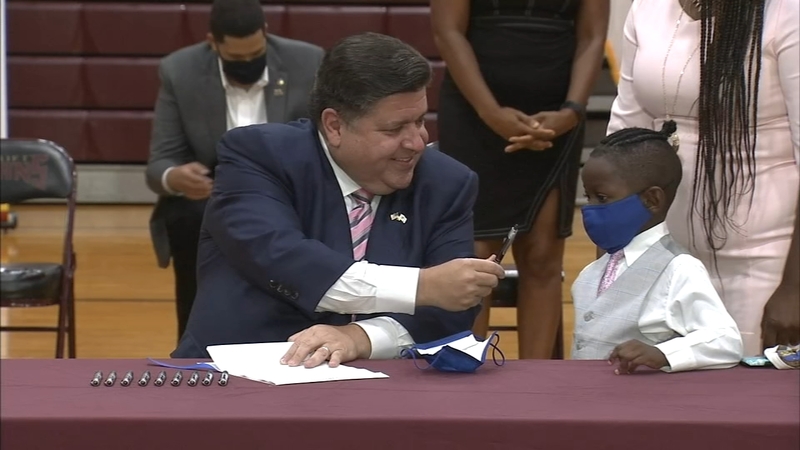 CHICAGO (WLS) -- Jett Hawkins was just 4-years-old when he was sent home from school for having braids.

Val Warner sat down with Jett and his mom, Ida Nelson, to talk about her fight to end hair discrimination in Illinois and across the country.

"I knew that, that was problematic, to tell me that a 4-year-old's hairstyle was a violation of the code of conduct. And his hair was very well groomed," said Nelson. "And so, I did not understand; well, I understood. I felt like they didn't understand the impact of the rule they were trying to enforce."

As a Black mother, Nelson struggled with the decision over what to do with Jett's braids.

"I took his hair down, with him crying the entire time, which broke my heart. That really ignited the decision that we needed to fight this out. But I didn't initially start out fighting. I started out just talking and educating," she said.

Nelson informed the school of the CROWN Act, a law which prohibits discrimination based on hair style and hair texture.

"So far, the CROWN Coalition, in partnership with Dove, has successfully helped to spearhead legislation ending hair discrimination in 14 states. So, Illinois has not enacted the CROWN Act just yet, but the Jett Hawkins Act is inspired by the CROWN Act, so they do recognize it," she said.

The Jett Hawkins Act bans discrimination in Illinois schools for hair styles like braids, locs and twists. The law went into effect Jan. 1, 2022.

"Sen. Mike Simmons, who wears freeform locs, and when he saw Jett's story he understood, and he saw himself, which is why representation is so important. And he wanted to jump in and do his part, too, and help me to change this," said Nelson.

Nelson plans to keep educating others about Black hair and will continue her push to end hair discrimination worldwide.