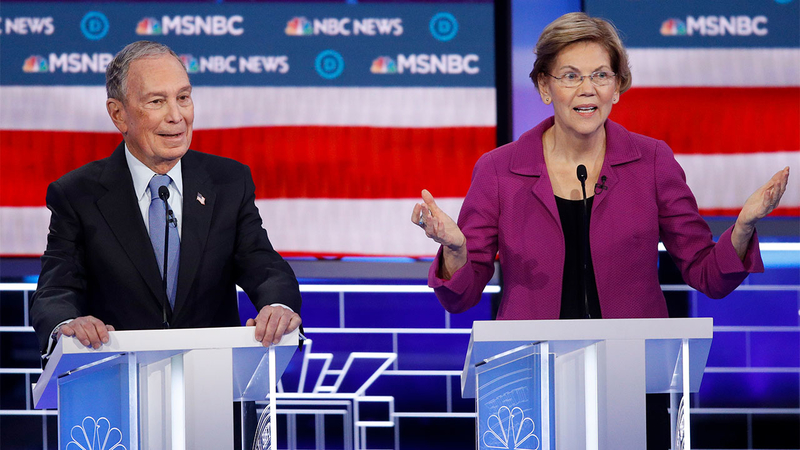 LAS VEGAS -- Mike Bloomberg has tried to fend off demands from several of his Democratic presidential rivals that he release former female employees from any nondisclosure agreements concerning allegations of workplace harassment.

Sen. Elizabeth Warren put Bloomberg on the spot at Wednesday night's debate in Las Vegas, asking the former New York City mayor to release women from these agreements and saying his defense doesn't cut it.

Bloomberg has previously been accused of fostering a hostile work environment for some female employees.

"The mayor has to stand on his record, and what we need to know is exactly what's lurking out there," Warren said. "He has gotten some number of women -- dozens, who knows -- to sign nondisclosure agreements both for sexual harassment and for gender discrimination in the workplace."

She added: "Are you willing to release all of those women from those nondisclosure agreements so we can hear their side of the story?"

Bloomberg said he has "no tolerance" for such behavior and that he saw the agreements in question as consensual and not up to him to dissolve. He went on to say that none of the agreements "accuse me of doing anything other than, maybe they didn't like a joke I told," a response met with boos from the debate audience.

He added: "Those would be agreements between two parties that wanted to keep it quiet. And that's up to them. They signed those agreements and we'll live with it. "

"We are not going to beat Donald Trump with a man who has who knows how many nondisclosure agreements and the drip, drip, drip of stories of women saying they have been harassed and discriminated against. That's not what we do as Democrats," Warren added.

Former Vice President Joe Biden also said he felt Bloomberg could just say the word to release anyone from the agreements.

Bloomberg's campaign later blanketed Twitter with videos of women defending Bloomberg and characterizing him as respectful.