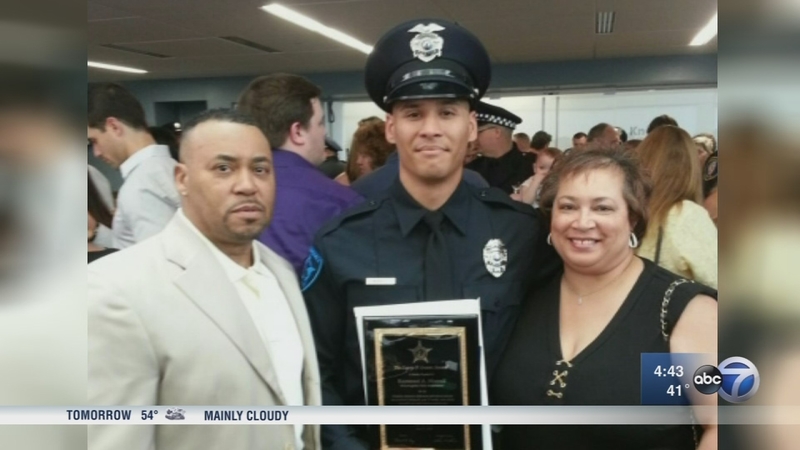 "Horrible. It's just devastating. It's just, to see a young kid... It's almost like losing a child in a sense. Just so young, with a great future ahead of him," Giammarese said.

The rookie officer was young and eager. He had wanted to be a police officer for a long time. Murrell joined the Bloomingdale Police Department less than a year ago, and already received a medal for saving a heart attack victim.

"He made such an impact in less than a year in our police department, involved in many of our community programs, "Shop with a Cop." He had a life-saving award at such a young stage in his career. Just a great guy, loved by our department," Giammarese said.

Flowers and candles marked the spot where Murrell died, on Army Trail Road near Cardinal Avenue.

Police said he was on his way to a retail theft in progress, possibly involving four individuals, at a nearby store. He was heading west on Army Trail in an unmarked squad, with his lights on, when witnesses said they saw his SUV hydroplane.

He lost control and crashed into a traffic light pole just after 9:30 p.m. The car was so badly damaged, he had to be extricated from the car. That was a tough moment for his fellow officers, who rushed over to help.

"Many of our guys played a role in trying to get him out of the car. When you see one of your fellow workers trapped... We have grief counselors coming in later this morning. It's just going to be a tough time for us," Giammarese said.
Murrell was rushed to Adventist GlenOaks Hospital in Glendale Heights, where he later died.

The police chief said traffic cameras in the intersection will be a part of the investigation.

Traditional bunting was put up at the police station Friday, as the small, tight-knit department - less than 50 officers - mourns its first officer killed in the line of duty. Giamarese said to his knowledge, Murrell was also the first officer killed on the job in DuPage County in more than 20 years.

"Just a wonderful - just a great guy. That's the kind of person we wanted for our department. It's just a great loss," Giamarese said.

The father and step-mother of Officer Murrell will have difficult decisions in the days ahead with more family members arriving to prepare his funeral.

"The only solace I have in this is that he died doing what he loved," said stepmother Lori Murrell.

"His sole purpose was just to help people, protect people. From day one, he wanted to be a policeman," said father Anthony Murrell.

Outside of work, he could often be found in his father's garage. Murrell and his father restored an award-winning 1970 Oldsmobile 442 Cutlass.

"I just got some car parts today just a few minutes ago. We were talking on the phone, we were talking about which ones to get and they're here and he's not," said Anthony Murrell.

The police chief believes weather may have played a role in the crash. No other vehicles were involved. No other injuries were reported. The crash remains under investigation.