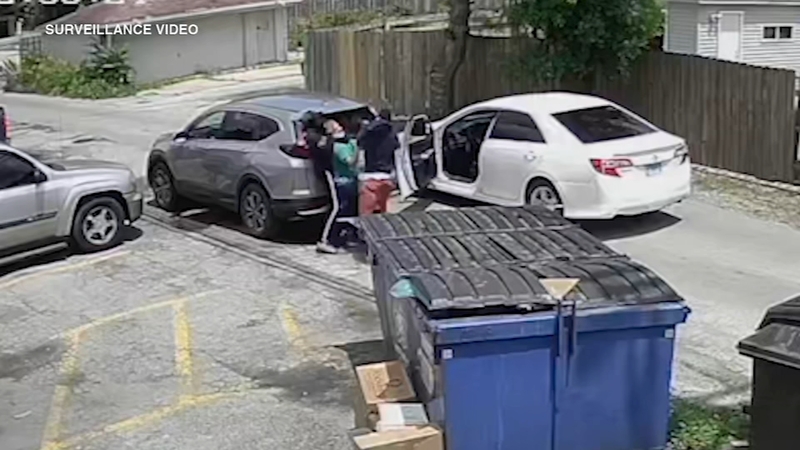 BLUE ISLAND, Ill. (WLS) -- A Blue Island carjacking that was caught on camera shows a restaurant worker being attacked in broad daylight.

Restaurant worker Rogelio Hurtado said he was beaten, choked and had a gun pointed in his face behind Pollo Locuas on Monday. He was finishing loading an SUV when a masked man pulled out a gun and attacked him.

"So I just pushed it away from me, and that's what led to the altercation," Hurtado said. "He was holding on to it really strongly and I think he was really scared, like, 'Oh, he'll probably take it.'"

Another man then gets out of the white car as his accomplice fights with Hurtado. Both men struggle with Hurtado as he starts getting choked, but he keeps fighting.

Carjacking safety tips: What to do if you're approached by a carjacker

Both men attacked and punched him before he fell to the ground. He lost consciousness for a few seconds as the men beat and robbed him before leaving him on the ground and driving away.

"Rogelio was blessed that nothing happened," said restaurant owner Nubia Chavez. She immediately checked her surveillance video and was able to see a license plate to give to police.

"I was able to get the video and we have the plate number of the white car, which we found out that they stole it the day before in Crestwood," Chavez said.

Rogelio Hurtado understands just how dangerous the violent robbery was and reflected on how his instincts could have led to a different outcome.

"When I did make some of my decisions, I realized I don't feel as bad because I prioritized the gun over everything. Over the chokehold," Hurtado said. "Because at the end of the day, again, I have minor injuries. You shoot me in the wrong spot I wouldn't be standing here."