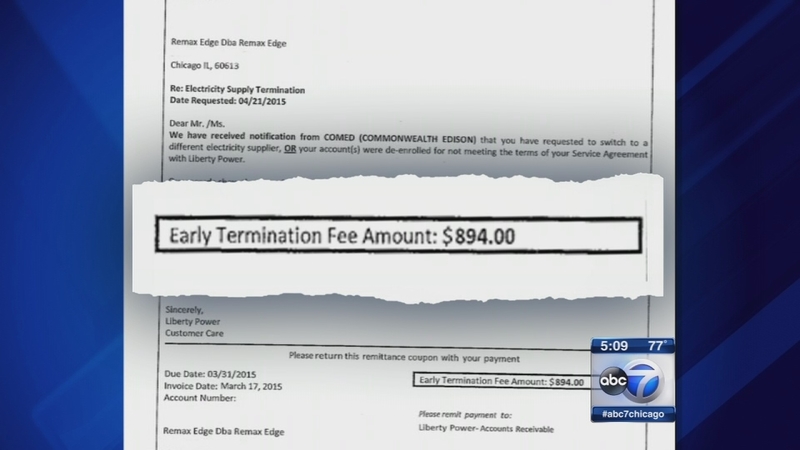 CHICAGO (WLS) -- A state bill could control exit fees on electric plans. Illinois legislators and activists fear consumers are getting gouged when they try to cancel plans they don't like.

The numbers could give you sticker shock. It can cost anywhere from $500 to $1,000 just to get out of an agreement. Providers say the higher exit fees make good deals possible.

Realtor Mark Zipperer found a better deal on his electric bill for his office, so he left the unregulated supplier Liberty Power. That's when Zipperer got a bill for almost $900. The company charges an exit fee for leaving the contract early.

"I was shocked," Zipperer said. "Is that a typo? A mistake? What is this all about?"

Zipperer and his office manager said they demanded a copy of the contract because they thought they had completed the agreement. They were sent this copy of a new, 24-month renewal agreement with a signature, but they say they had never signed it.

"If it would have been $80, that might have been one thing. We would have paid for it to get it over with and not have to invest the staff time, But this fee was almost $900 so as a small business owner I am going to fight that," Zipperer said.

After filing a report with the Citizen's Utility Board and disputing the issue, Liberty Power reversed the exit charge and gave them an additional $500 refund to match the rate they would have paid if they were with the regulated ComEd during the time in question.

The company also sent the ABC7 I -Team a statement, "...We regret this situation occurred and apologize for the inconvenience and discomfort experienced by our customer..."

"These contracts right now under the law can have enormous cancellation fees and we think it is really unfair for consumers," Senator Daniel Biss, (D) 9th District, said.

Biss is a sponsor of a bill that would cap exit fees from alternative suppliers to $50 for residents and $150 for small businesses.

"A lot of times the contracts those suppliers provide can be confusing. Sometimes people enter into them because there are door-to-door salesmen and they find out that the contract isn't what they thought it was. They want to get out," Biss said.

Alternative energy suppliers say exit fees are in writing and in place to protect them after giving consumers a lower price upfront for extended periods of time. If a customer cancels, the provider must resell that cheap energy deal back to the marketplace.

"It is very frustrating how this can be done," he said.

The bill is on Gov. Bruce Rauner's desk, awaiting his signature. If he signs it, it would go into effect immediately. There are already similar laws on the books for alternative gas suppliers.