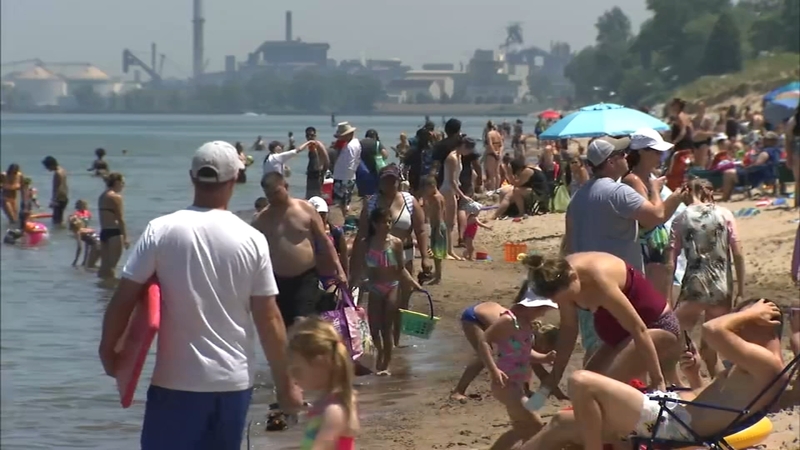 CHICAGO (WLS) -- With Chicago beaches still closed, some Indiana parks and beaches are seeing a big influx of visitors from Illinois. That's good for local businesses, but also creating some new safety concerns.

Park officials said normally on a weekday afternoon beaches at Indiana Dunes would not be crowded, but on Thursday they were packed. With limits on where you can enjoy the outdoors in Chicago proper, more people are flocking to the dunes and some of them, officials said, are causing problems.

Along Lake Michigan, West Beach was packed as far as the eye could see.

"It's a hot, beautiful day. The grandkids are bored at home. We've been isolated for so long," said Vianey Rosales, visiting from Chicago.

Rosales would normally be on Chicago's 12th Street Beach, but with the city beaches still shut down she made the easy drive over the border.

"All of a sudden, almost every day that it's been warm like today, Thursday, it's like a holiday weekend," said Paul Labovitz, supervisor of Indiana Dunes National Park.

Labovitz calls it the Illinois invasion. The Dunes' tourism director said the influx is already boosting the local economy.

"They go into our communities and eat in our restaurants and stay in our hotels," said Lorelei Weimer, executive director of Indiana Dunes Tourism.

But officials are also worried by the large crowds of young people showing up in the late afternoon.

Labovitz didn't have any specific numbers to share, but said the majority are Illinois residents.

"A couple times each summer, we'll have a problem. And now it's a couple times a week, we have a problem and it's not even summer yet," he said. "I think if that's their intention, they should just stay home or keep it somewhere else."

Now law enforcement are ramping up physical deterrence, park rangers are checking coolers and a fire boat is patrolling near shore.

"This is a great place to come with your family to have fun, but if you're here to make mischief, you're gonna leave with a very expensive souvenir for visiting Indiana Dunes," Labovitz said.

The threat of COVID-19 also hangs overhead, and Labovitz said his team can only recommend social distancing, which is difficult on a crowded beach. ABC7 Eyewitness News spotted just one beachgoer wearing a mask.