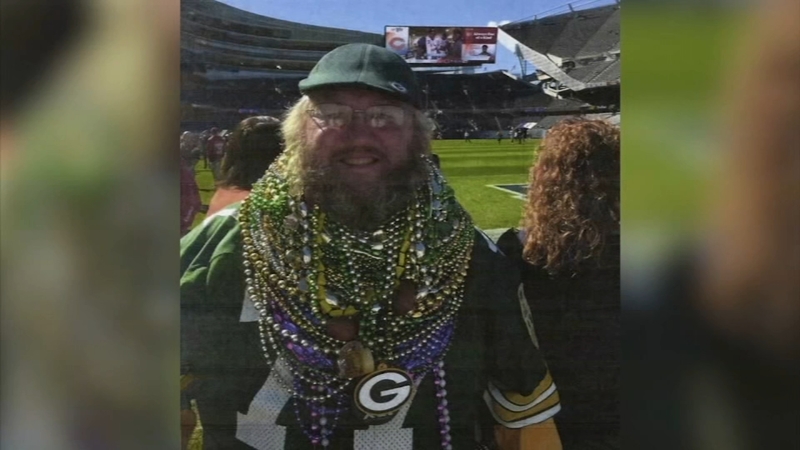 CHICAGO (WLS) -- The Chicago Bears don't play the Green Bay Packers until Sunday, but the team already scored a win against Packers nation in federal court on Thursday.

The Packers fan took the team to court over what he said was an unconstitutional dress code enforcement.

A judge ruled Thursday in favor of the Bears.

But the Bears and the Packers fan will square off again, and not just on the football field.

Russell Beckman, a Green Bay native, is a high school teacher during the week. On the weekend, he transforms into a Packers super-fan. He's such a super-fan, in fact, that he purchased a Bears personal seat license just so he could go to the big Bears-Packers rivalry game once a year.
Beckman previously participated in a program that allowed him access to the field before games, decked out in his green and gold Packers gear.

So Beckman filed suit against the Bears' owners in federal court. Beckman and the Bears have been locked in legal battle for more than a year.

This is America, last time I checked," Beckman said Wednesday. "George McCaskey doesn't need to protect Bears fans from the likes of me."

Beckman and his attorney, Michael Lieber, say this case is about First Amendment rights.
"We're not only fighting for Mr. Beckman's rights, we're fighting for the rights of all fans who come to Soldier Field," Lieber said.

Beckman said this wardrobe tiff takes away from the sport.

"I love the rivalry, but the Bears are diminishing this rivalry. It's just stupid," he said.

The judge made her ruling by determining the "balance of harms" each party has suffered and found the balance of harms "to be essentially neutral here," according to the ruling.

Judge Joan Gottschall said in her 21-page ruling Thursday that the Bears did not specifically explain how they will be harmed, other than to say that seeing a person wearing Packers gear in the Bears' end zone will "hamper their fans' enjoyment of the game."

Gottschall also pointed out that the Bears allot a certain number of passes allowing fans of the opposing team onto the field too.

But Beckman scored some points as well: Gottscall said Beckman "showed some likelihood of success on his First Amendment claim" and "made a fairly modest showing that he is likely to succeed in demonstrating that the Bears are a state actor."

"The Judge today said the parties' arguments to the Court were essentially a tie ball," Lieber said. "But a tie ball goes to the home team at this juncture. This case is in its early stages. As we proceed through discovery, we expect that the facts will show that the Bears are so entwined with a public entity - the Chicago Park District - that the Bears must uphold all Soldier Field patrons' First Amendment rights. And that includes fans of opposing teams."