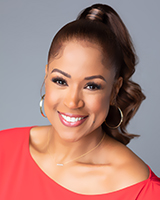 CHICAGO (WLS) -- Cleo Pendleton is speaking out again about gun violence 10 years after the death of her daughter, Hadiya. Speaking to ABC7 Chicago's Val Warner, Pendleton encouraged mothers who have lost children that healing is personal and takes time.

In 2013, Hadiya Pendleton was shot and killed while under a park pavilion in Chicago's Kenwood neighborhood.

The 15-year-old had just left a final exam, joining friends at Harsh Park, when a car pulled up and shot at the group.

"It's tough telling your story and remaining hopeful," Pendleton said. "This is my cross, and I'm doing my best to bear it and represent moms out there who feel like me."

"I was 15 at the time, too, and I lost somebody really young," Booker said. "It really affected my life a lot."

Booker said her friend's death has even influenced the way she parents her children in regard to their safety.

"I don't want to be a strict parent," Booker said. "It's just a habit because of what happened to her."

Her mother said she can only imagine who Pendleton might have become had she lived.

"She told the best stories. She said she wanted to be a journalist but then it was so clean at the Capitol she thought she wanted to go into politics so who knows where that girl would have landed," she said.

Pendleton's story captured the attention of the nation at the time of her death. A garden will be built in her honor at the future site of the Obama Presidential Center in Jackson Park on Chicago's South Side. Her mother wishes she was still here, but said that the memorial garden provides some comfort to her while also reminding others who she was.

"People want us to normalize this experience, and that's the problem. It should be so disgusting to everyone that people are losing their children in a way that is so unnatural and unnecessary," Pendleton said.