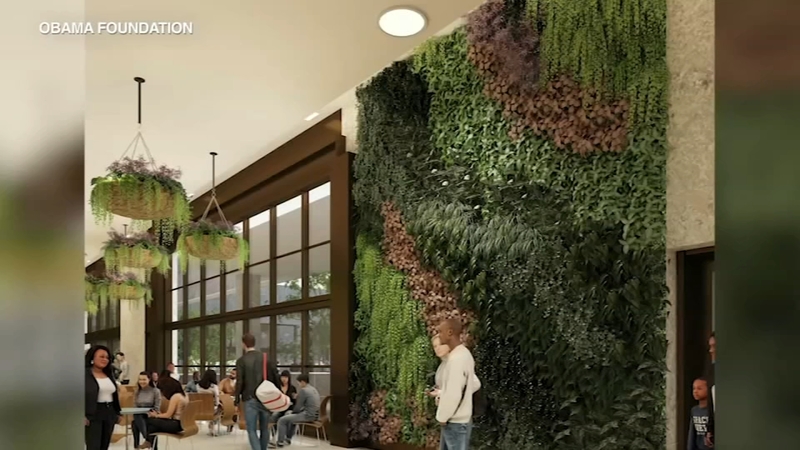 CHICAGO (WLS) -- Amid a snow-covered Jackson Park, there are plans for a bright sunny garden.

Hadiya Pendleton Winter Garden will be a place that will welcome visitors to the Obama Presidential Center.

"When I learned the winter garden would be named in honor of Hadiya, my heart just melted," said her mother, Cleo Cowley-Pendleton.

Over the years, the Obamas have spent time with Hadiya's family. And in December, Michelle Obama asked Hadiya's mother if the Obamas could honor Hadiya that way.

"You can see the shock and joy in her face," said Michael Strautmanis, executive vice president of civic engagement for the Obama Foundation.

He said the garden will be enclosed in glass in the winter, but will be opened up in better weather. And it will be the area through which all will walk through to access the center's three buildings and programs.

"Our hope in celebrating her life in this sun-filled space," Strautmanis said. "That people get the opportunity to really reflect on how important our children are to us and hopefully reflect on steps we can all take to protect them."

In 2013, Hadiya Pendleton was a shot and killed eight days after performing as a majorette with the King College Prep band at President Obama's second inauguration. Michelle Obama attended her funeral.

"Hopefully this garden will share her light with even more people for generations to come," Michelle Obama said.

"I think it's so important that Hadiya matters, because we all matter," her mother said.

Recently Center donor Jeff Bezos asked for the plaza of the Center to be named for the late Congressman and civil rights leader John Lewis.