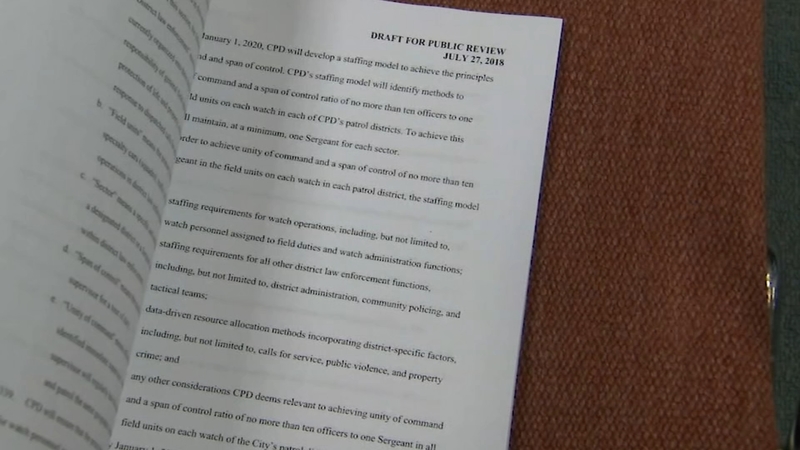 CHICAGO (WLS) -- The Illinois Attorney General's Office and the city have released a massive report that will provide the framework for sweeping reforms in the Chicago Police Department.

What makes this consent decree different from any other, previous efforts to reform the police department is that it will be enforceable by a judge in federal court, and will have a monitor to oversee progress.

The report is 225 pages long and is the culmination of nearly 10 months of negotiations between the city and the attorney general's office and the police department. It took into account public input and expert advice and it is being called a milestone agreement that will go further than any other consent decree in the country.

The public will be able to review and comment for 21 days starting today and ending August 17.

After two highly critical reports found systemic problems in the police department in the use of unnecessary and deadly force Lisa Madigan's office sued the city to force reforms, many of which she acknowledged are already in place.

"Today is neither the beginning nor the end of the work that needs to be done to reduce crime and have safer communities in Chicago. It is however a significant milestone on what will be a long journey that I have every hope and belief all Chicagoans wish to take," said Madigan.

Ever since the release of the video of the fatal police shooting of Laquan McDonald the Chicago police have been under scrutiny and pursuing various reforms.

Now the draft consent decree seeks to take those changes to the next level and make them enforceable in federal court.

"What is different about this police reform effort is that unlike those of the past, attempts to just talk the talk and not walk the walk will be unsuccessful. The final consent decree will be entered as a court order by the federal judge, and the judge will appoint an independent monitor to oversee its requirement," said Madigan.

The consent decree includes more than 500 reforms covering the use of force and force reporting; community policing and impartial policing; accountability and transparency; recruitment, hiring and promotion; training and supervision; officer wellness; and crisis intervention.

It includes many of the reforms the police department has already put in place.

Once it is finalized and approved by a federal judge it will remain in place until all conditions are considered met.

"It's a work in progress, and I think for us to sit there and somehow put an arbitrary time line, I'm not going to do that," Emanuel said.

Though the need for a consent decree was sparked by the release of the video of the police shooting of Laquan McDonald, it does not include the requirement that police document every time they point a gun at someone. That is still being negotiated.

Police have fought that, Madigan continues to push for it, and negotiations continue. Superintendent Johnson insists his officers want to be the best they can be, and are embracing reforms, but he says changing a culture takes time.

"What I can't do as superintendent of this department is put police officers in a situation that causes them to hesitate," said Johnson. "A hesitation can mean loss of life for that officer or loss of life for a citizen in this city and we simply can't have that."

The ACLU criticized that provision being left out, it is something that Madigan has pushed for, and the city's Inspector General and others have as well.

The mayor said negotiations on that point will continue Monday and Tuesday.

Modifications can then be made before it's submitted to the federal judge for approval.

Reaction to the consent decree draft depends on who you ask. While some activists say it doesn't go far enough to address the issues of community policing, the police union worries the proposed could mean more harm than good for cops walking the beat.

There is mixed reaction as the draft of a new consent decree calling for enforcement of reforms inside the Chicago Police Department is released.

While at a news conference, the mayor, police superintendent and the Illinois attorney general lauded the document, some community activists and others in the black community remain only cautiously optimistic.

South side pastor Fr. Michael Pfleger of St. Sabina Catholic Church is one of them.

"I think what is significant about this is having an independent monitor and a federal judge to oversee this and make sure that this is not conversation, this not nice stuff on paper, but this is going to be about making it happen," said Fr. Pfleger.

Today's draft is the culmination of months of negotiations with the city and the police department.

Although, it will limit the use of police force in some instances and provide greater transparency, some critics question how the consent decree will change the current police culture.

The union that represents Chicago cops says they weren't involved in the draft negotiations and remain concerned the consent decree could adversely affect their membership.

"That's one the reasons why I want to make sure that our members are protected in their collective bargaining rights. Look we have been without a contract since July 1st of last year," said Police Union President Kevin Graham.

One notable condition not in the draft but still under discussion, is a requirement that cops document every time they point their weapons at someone.

"Police reform has been tried on a voluntary basis for many years and has failed so it's time to mandate it and this order, once it's approved by the court, would mandate reform," said Washington.

There will be hearings so the stakeholders can weigh in on the plan.

The full draft of the consent decree has been released to the public and may be accessed here: http://chicagopoliceconsentdecree.org/