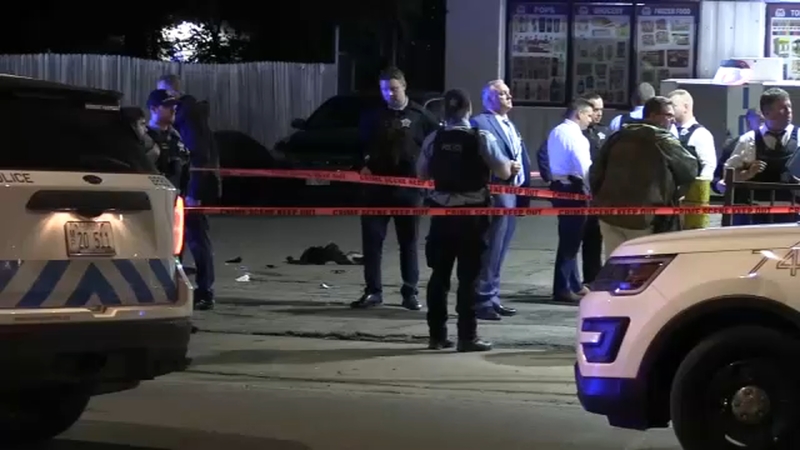 This comes as the Civilian Office of Police Accountability conducts an investigation into the shooting.

"The officer involved in the shooting Wednesday night in the Austin neighborhood has been relieved of police powers, effective today, while the Civilian Office of Police Accountability is conducting this investigation," the department said in a statement Friday.

Police said a gun was not recovered from the scene of the shooting and witnesses say the teen was running from police with his hands up when he was shot.

Chicago police were trying to stop a stolen vehicle wanted in connection with a carjacking from a neighboring suburb just before 10:15 p.m. in the 800-block of North Cicero Avenue, near Chicago Avenue. As officers approached the vehicle, the boy fled on foot, CPD said.

"The subject flees to a gas station parking lot and turns toward the officers," Chicago Police Superintendent David Brown said during a press conference Thursday.

Witnesses said they watched in disbelief as police sprinted toward the gas station at Chicago and Cicero avenues.

"All of a sudden, I see a little guy wearing all black get out of the car and run toward the gas station, and his hands were up. And I seen the cop run up to the boy and started shooting. That boy didn't have no gun or nothing," said one witness who asked not to be identified.

Authorities said one officer pulled his weapon, then shot the 13-year-old, according to Chicago police.

"The officer then discharges his weapon, striking the individual once," Brown said.

"They said, 'Put your hands up, put your hands up!' The boy's hands were up. There's other people out there that seen it. I got it all on my phone -- his hands were up. He didn't have a gun. They shot him for no reason," said another witness.
Alderwoman Emma Mitts, who represents the 13th Ward where the shooting happened, said it was unnecessary.

A Chicago police officer shot and critically injured a 13-year-old carjacking suspect near Cicero and Chicago Avenue on the West Side.

"Why would you want to shoot when you could easily chase him," Mitts said.

Video shows officers moving the young boy's body, which police say was in an effort to move him away from nearby gas pumps.

Officers rendered aid to the individual, who was taken to Stroger Hospital in critical condition.

"The 13-year-old did not have a weapon that was recovered from the scene. So now that brings up concern to why and what happened," Mitts said. "Certainly we don't want an officer out here shooting our children for no reason, that's insane."

RELATED: COPA releases footage of 2020 shoot out between behind West Side police station

At least one other suspect drove away in the wanted vehicle, which was later found empty in the 3800-block of West Monroe Street in East Garfield Park.

"Officers engaged in a foot pursuit of one of the occupants of the vehicle," COPA First Deputy, Chief Administrator, Ephraim Eaddy said. "One officer discharged their firearm, striking the occupant, who is 13 years of age. The officer's body camera was activated, and COPA is in possession of 3rd party and POD video that captures the incident. No weapon was recovered on scene."

No officers were wounded by gunfire, but two were taken to a nearby hospital for observation. They were listed in good condition.

COPA said it is prohibited from releasing video and other materials in accordance with the Juvenile Court Act.

"COPA is committed to a full and thorough investigation into the officer's use of force to determine if their actions were in accordance with Department policy and training," the agency said in a release.

Brown said he was limited in the information he could share so far in the investigation.

Chicago police were trying to stop a stolen vehicle wanted in connection with a carjacking when the boy got out and fled on foot, officials say.

The wanted car had been used in a carjacking the day before in Oak Park, police said.

On Tuesday, a man in a black face mask stole a car left running with a 3-year-old inside near Lake Street and Oak Park Avenue around 7:30 p.m., police said. The child was found unharmed about 15 minutes later inside the car, which had been abandoned in the 200-block of Madison Street, police said.

Police are still looking for a second suspect.

COPA is investigating the incident, and any officers involved will be placed on routine administrative duties for 30 days.

"I am aware of the officer-involved shooting that resulted in a thirteen-year-old being shot by a Chicago police officer yesterday evening. I have been in contact with Superintendent Brown and the Civilian Office of Police Accountability, led by Chief Administrator Andrea Kersten, is actively investigating this matter. I have full confidence that COPA will investigate this incident expeditiously with the full cooperation of the Chicago Police Department."