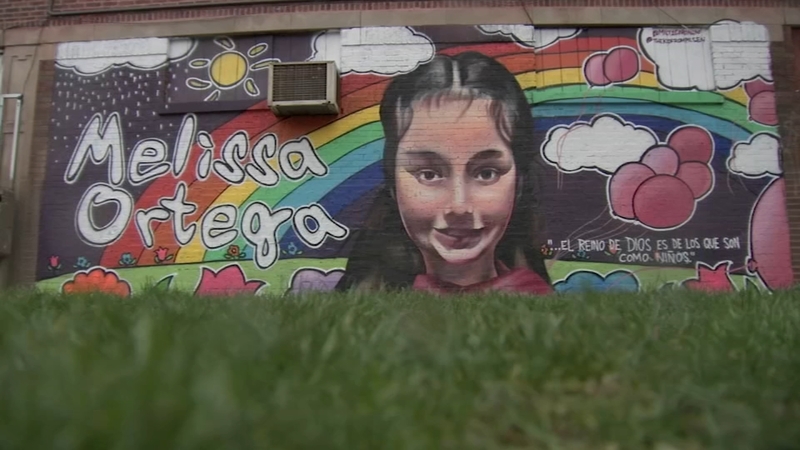 CHICAGO (WLS) -- Community muralist Milton Coronado has created a new piece of public art in Little Village to honor an 8-year-old killed in a shooting while walking with her mother.

"When I look at it, I feel it's innocent, it's pure and I hope it represents hope and a better life," he said.

Coronado's work can be seen throughout the city of Chicago. Much of it is devoted to lives that have been lost too soon. That includes Melissa Ortega, who was shot and killed in January, running with her mother from a hail of bullets from a nearby gang shooting.

Ortega had moved to Chicago from Mexico only months earlier, but was struck by a stray bullet near 26th Street and Pulaski Road.

The mural is a collaborative effort between Coronado, his non-profit organization The Mural Movement, Pilsen photographer and videographer William Guerrero who is known as The Kid from Pilsen on social media, and community activist Ricky Medina.

The Mural Movement collected donations to create the mural, Guerrero helped document and paint Milton's vision, and Medina helped find the location for the mural.

"I thought like a child, what will the child look like? And I thought rainbows, colors, trees and sun, and white clouds," he said.

And the mural is personal for him in two ways: as a father himself, and also as a man who lost his father to gun violence when he was just a young boy.

"He was killed in the same community, in the same way," he said. "And so it's very personal for me to do this."

Coronado and his team's work captivated Melissa's mother, who personally thanked them.

"She said she's very thankful," Coronado said. "It captured her, not just the way she looked but her essence, with the whole design, with the colors, and the balloon. Pink balloons were her favorite."