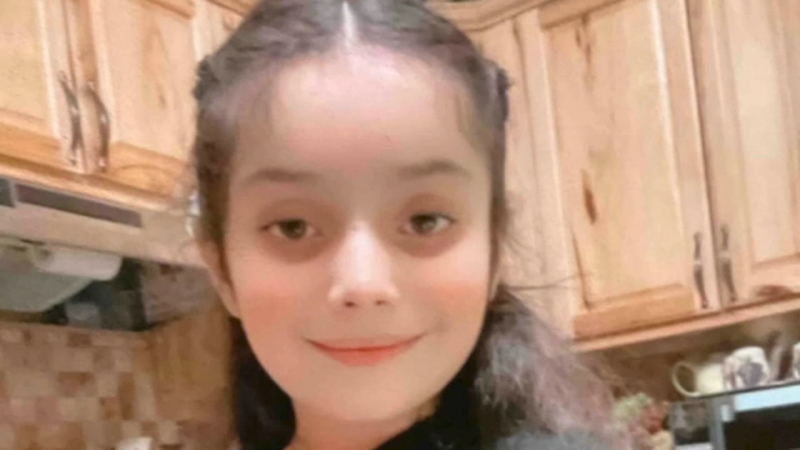 CHICAGO (WLS) -- A reward is being offered for information as Chicago police develop "strong leads" in the Little Village shooting death of an 8-year-old girl over the weekend.

Melissa Ortega was a third-grader at Zapata Academy. Family said she had just arrived in Chicago from Mexico back in August, trying to live out the American Dream.

But Saturday afternoon, she was shot in the head by a stray bullet as she walked with her mother near 26th Street and Pulaski Road.

Her mother, Aracely Leaños, spoke to Univision Network's Despierta America about her loss and heartbreak, with the pain in her voice almost too much to bear.

"Me arrebató mi vida entera. Me quito lo más hermoso. Me quito mi motor de vida por el que yo me levantaba todos los días a seguir adelante. Me quito una vida llena de sueños," she said, meaning, "He took away my entire life. He took away the most beautiful part of it. He took away my purpose for being. The reason I got up every day. He took away a life full of dreams."

Monday morning, her family released a statement saying in part, "Melissa hoped for a better life here: she wanted to learn English, she wanted to experience Chicago snow, she wanted to get a build-a-bear, she wanted to make Tik Tok dances with her friends. At age 8, she was a girl full of hope and had her whole life ahead of her. She sought to achieve the American Dream but was instead given American Violence.

As her mother laments, "Me mataron a mi bebé. Me la mataron ... mi princesa mi dulce niña," meaning "They killed my baby. They killed her ... my princess my sweet girl."

Ortega was walking with her mother when a gunman emerged from a nearby alley and opened fire, unleashing a hail of bullets that fatally struck the 8-year-old girl twice in the head and wounded a gang member who was the intended target, a police report shows.

About 2:55 p.m. Saturday, Ortega and her mother were walking east on 26th Street near Pulaski Road when the gunfire erupted, according to the internal report obtained by the Chicago Sun-Times.

"This is very sad," said Reyna Torres Mendivil of the Consul General of Mexico in Chicago. "And it's not the first incident. You'll remember Adam Toledo. We have experienced this before."

After reviewing surveillance video, investigators determined that a male dressed in all black had stepped out of an alley near 26th Street and Komensky Avenue before firing at a 26-year-old man who was identified in the report as a member of the Gangster Two Six street gang. As the man started running east on 26th Street, the shooter continued to unload, according to the report.

A police source said the motivation of the shooting is still unclear but noted the victim's gang has been feuding with both the Latin Saints and Latin Kings.

When the shots rang out, Ortega's mother recalled running toward a bank when she felt her daughter "go limp," according to the report. That's when she realized the girl had been shot twice in the right side of her head.

The intended target, who has been arrested 13 times and convicted of two felonies, was struck twice in the back, the report states.

The shooter ran south on Komensky Avenue, according to the report.

At the scene, investigators found over 13 9mm shell casings, one fired bullet and two bullet fragments, the report states. They also obtained video footage from a police POD camera and a private camera.

During a press conference Monday morning, Chicago police said more resources have been deployed in the area, and a comprehensive plan has been developed to vigorously address the gang conflict that caused the girl's death.

Chicago police gave an update Monday on the investigation into the Little Village shooting that killed an 8-year-old girl.

Chicago Police Superintendent David Brown said a $15,000 reward has been offered for information leading to an arrest and conviction in the shooting.

"It's just unspeakable to lose the life of an eight year, a little girl," Brown said. "We won't stop working until the Ortega family, this community and this city see justice."

Brown added that police have "strong leads" in their investigation.

"The information we have is very delicate. We do have people cooperating and we have very strong leads," he said.

Investigators blasted the gang wars they said led to the little girl's death, promising to direct any and all resources to locate those responsible.

"Losing a child under any circumstances is horrifying, and the circumstances in which this family lost this precious, precious child is almost unspeakable," Chicago Mayor Lori Lightfoot said.

Lightfoot, at a CTA groundbreaking Monday morning, said the war on gang violence must include her proposed gang forfeiture ordinance, which she continues to defend even thought it has been widely criticized.

A memorial for the 8-year-old continues to grow as strangers stop by with candles and flowers.

Chicagoans have been calling for an end to gun violence and increased mental health resources after the shooting death of an 8-year-old girl.

Community leaders gathered once again Monday, calling out the lack of mental health resources in a community traumatized by gun violence.

"I, myself, have a 7-year-old little girl, and I walk these same streets with her. I hold her hand," said Chela Garcia, with the Little Village Community Council.

The Mexican Consulate is helping the family in their quest to repatriate Ortega's remains to her hometown in Mexico, from where she and her mother moved only six months ago.

"This touches everybody's heart, and we are with Melissa's family, but there is work ahead," said Reyna Torres Mendivil, consul general of Mexico in Chicago.

That work will likely take several days, as funeral arrangements are finalized and emergency passports for the family to return to Mexico are expedited.

A few miles away, right outside the office of 15th Ward Alderman Ray Lopez, another deadly shooting, this time a man, was gunned in his car after a traffic altercation Saturday morning.

"You could see about six shots fired off right here in the middle of Archer and 43rd," Lopez said. "Whether it's gang violence or the escalation of just people taking matters into their own hands, we see that our city is becoming unhinged, and that the police department truly doesn't have a plan to help restore law and order in the city of Chicago."

"Born in Tabasco, Mexico; Melissa immigrated with her mother to the United States 6 months ago. After spending 3 months in California, Melissa and her mother decided to come to Chicago where most of her family resided. Quickly after arriving, Melissa enrolled at Emiliano Zapata Academy and her mother started to work to provide for her daughter. Like many immigrants, Melissa hoped for a better life here: she wanted to learn English, she wanted to experience Chicago snow, she wanted to get a build-a-bear, she wanted to make Tik Tok dances with her friends. At age 8, she was a girl full of hope and had her whole life ahead of her. She sought to achieve the American Dream but was instead given American Violence.

"Mom can you buy me a hamburger?

"Of course, honey, do you want to go now or after we go to the bank?

"We can go later I'm not hungry right now, but promise you'll buy me one?

"Of course, I promise.

"Melissa didn't get to enjoy her hamburger from McDonalds. A stray bullet reached her, and a crowd of people came to aid. We want to thank everyone for their condolences and prayers; however, we wish people would come together and help us bring justice. Too often we hear news of shootings across Chicago, this continuous activity makes us habituated to these types of scenes. That is NOT something we should have to be accustomed to. We want safer neighborhoods, we want our kids to live long lives, we want authorities to patrol our area, and although we want Melissa back, we hope you will help us maintain her memory. Please don't let her die in vain. No more innocent kids should be killed Mayor Lightfoot needs to make Chicago safe. One of Melissa's final wishes was to go back to Mexico, she missed her family and her hometown, as a final plea we ask you to help us complete that final wish by contributing to her GoFund me and keeping her in your prayers (https://www.gofundme.com/f/melissa-ortega). We know God received an angel today, but we still miss her. Her infectious smile will be remembered."