EF-3 tornado touches down in DuPage County, with damage reported in Woodridge, Naperville 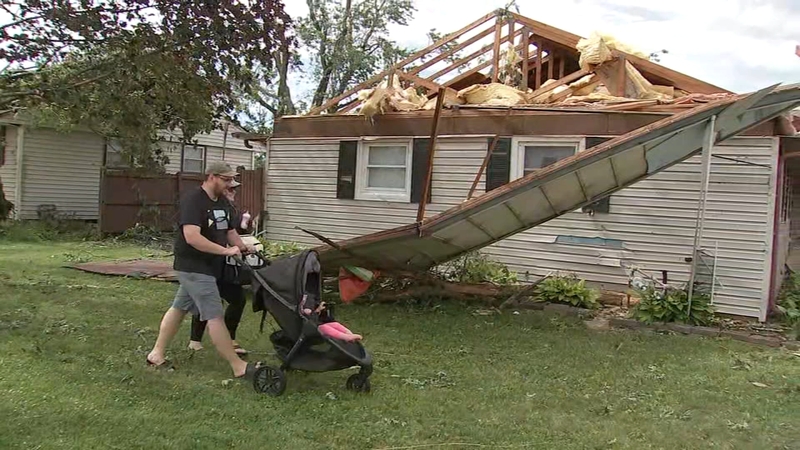 The large tornado was reported in southern DuPage County, both radar-indicated and by local storm spotters around 11:10 p.m. Sunday. Monday afternoon the National Weather Service said the damage they've seen is consistent with an EF-3 rating.

The tornado began in Naperville before it moved into Woodridge. Doorbell security video captured the moment the twister roared through a backyard in Naperville.

Woodridge police said the tornado touched down east of Route 53 between 83rd Street and 75th Street. The tornado then traveled east to the Lemont Road area.

The tornado then moved into the Darien and Burr Ridge area. ABC7 Meteorologist Tracy Butler said the tornado could have traveled as many as 15 miles.

As of 9:30 p.m., ComEd reported 2,900 outages related to the storm. Customers in hard-hit areas should expect to have power restored by Tuesday afternoon.

The Red Cross has opened a shelter for displaced residents at Thomas Jefferson Junior High School located at 7200 Janes Avenue in Woodridge. Anyone who needs assistance can also call the 24-hour Red Cross hotline at 1-877-591-0747.

Chopper 7HD flies above homes damaged by a tornado in west suburban Woodridge.

On Janes Avenue neighbors helped neighbors, and there is so much work left to be done.

"This is my childhood street," said Elizabeth Campbell. "Like, I grew up in this house and I just look and it doesn't look like anything like I knew it to be."

Violet, at only 12 months old, is one of the youngest tornado survivors, who rode out the storm with her parents in a laundry room in their home with no basement.

"She was with us when our roof flew off and our windows came in," said Alexis Reeder, mother. "And I'm sorry, I'm going to start to cry. And she, and we were OK. He jumped on top of us, and we hunkered down."

"We just kind of held her in our arms, and I made sure to protect them as much as I possibly could," said Joe Reeder, father. "It was surreal."

"She did not cry. She did not whine," Alexis said. "She was just a little tornado baby."

A few doors down, a woman in her 70s escaped her damaged home through a hole cut by firefighters.

More than 100 homes were damaged, including one home had the entire second story missing, while others had damage to roofs and garages. But only three people were injured enough to require transport to local hospitals.

"I never thought I would think that possessions don't mean anything anymore," said Nancy Moore. "They can all be replaced. But my husband and my friends can't be."

Officials credited technology and the ability to push out alerts and sound the alarm 22 minutes before touchdown with helping reduce the number of injuries and prevent casualties.

"It all happened so fast, it was kind of like a 'whoosh' and I crawled out of my room to get to my little kids and my big kid came up to help me get them and then we all got downstairs," Bridget Casey said.

In the face of adversity, the community came together. Brian Rock served free pizzas in Darien, using a wood fire oven in the back of his truck.

"People are hungry. No one has power. No one wants to open up their refrigerator," he said. "One gentleman said he tried to work his microwave off his generator, and it didn't work."

Chris Florczak, a widow, has owned only one home in her life, in Woodridge, which was destroyed in the storm. Monday, her sister and brother-in-law were on hand to help pick up the pieces.

"She moved in here in '75, and stuff that she treasured, it's all gone," said Mike Baar, brother-in-law. "They had to cut the garage door to get her out. And then her son came and got the two dogs out, that are still in our car."

But for all the property damage, residents are counting their blessings; no lives were lost.

Naperville's fire chief describes the damage after a tornado moved through the area.

In nearby Naperville, Fire Chief Mark Puknaitis said five people have been transported to hospitals, including one person who was critically injured.

Chief Puknaitis said about 130 homes were damaged by the storms, with 10 that are uninhabitable and one that is completely leveled.

"It's like bombs going off everywhere as the debris was hitting our house and the windows were breaking in. It was just, it was utter chaos," said Katie Long Piper, who was still processing the devastating impact of the storm.

She choked up thinking about her neighbors' home, destroyed.

"So just seeing that, it's pretty overwhelming," she said.

The leveled home belongs to the Patel family, and Monday afternoon volunteers were picking up the debris and sifting through the piles looking for valuables and other personal belongings, doing their best to ease the family's pain.

"I think it was a given that people would show up immediately," said Lisa Bracey, neighbor. "I mean, they're always here to help one another whether it's big or small. And we're just so grateful, our street was untouched. So how can I not pitch in when people have gone through this?"

"I'm just trying to think of the family," said Dominic Gabrielli, volunteer. "I'd want people to come out and help out as much as I can, so just doing the little things that would help."

On Nutmeg Lake, Leandro and Fermanda Saeze returned to their destroyed home to salvage a stuffed animal from their 9-year-old son's bedroom. Fermanda had seconds to rescue him before a piece of wood crashed through the roof, puncturing the boy's bed and pillow.

The extent of the damage in Naperville is widespread, with several subdivisions pummeled by powerful winds.

"Thank god nobody was out at that time," said Anthony Franco, storm victim. "If this would have hit earlier in the night, might have had a lot of casualties."

Chopper 7HD flew above 77th Street and Ranchview Drive where one home was completely destroyed, while one home next door had some roof damage and another appeared undamaged.

In Darien, the damage was pretty widespread with numerous trees down, either completely knocked down or sheered in half.

Some homes have sustained some damage in this area, including one with a chimney knocked over and shingles ripped off the roof.
As the tornado moved into Darien the wind damage continued with many trees damaged in an area between Plainfield and Bailey roads. A large tree branch landed on a car and a nearby apartment complex also sustained roof damage with some of the roofing landing nearby, revealing a dangerous aspect of the clean-up, large nails.

Extended school year classes, the Summer Science Camp and EL programs are all canceled for Monday. All school buildings and district offices are closed as teams survey the damage.

There's no update yet on the plan for Tuesday.

People are asked to stay away from storm-damaged areas. Those looking to help out in Naperville can call (630) 305-5340 and leave their contact information with city staff.