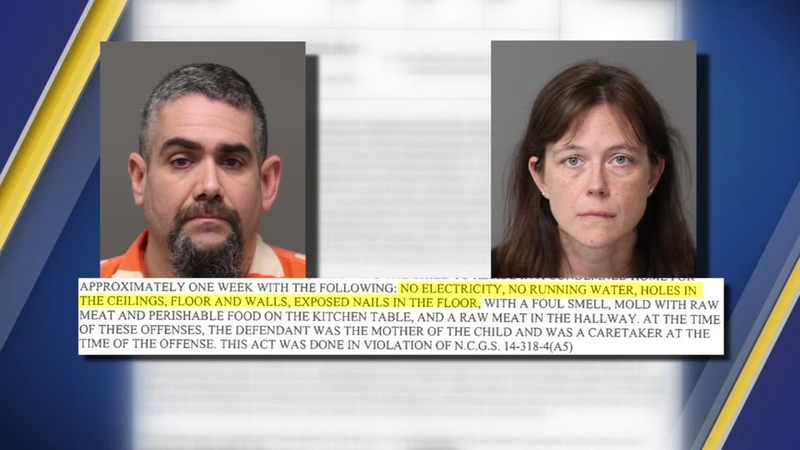 WAKE COUNTY, N.C. -- A Wake County mom and dad are behind bars after investigators found them living with their nine children in squalor.

The parents made their first court appearances Wednesday, WTVD reported.

Rebecca and Michael Bell, both 42, are facing five counts each of felony child abuse and five misdemeanor counts of contributing to the delinquency of a juvenile.

According to arrest warrants served by the Wake County Sheriff's Department, the family was living in a condemned home.

The warrants say the family moved to North Carolina from Nevada where they were homeless.

The five older children, ages 11 to 15, are all girls. According to the warrants, they were required to care for their younger siblings. Dates of birth listed on the warrants show the nine children range in age from 1 to 15.

The school-aged children were not enrolled, according to investigators.

The arrest warrants show the couple's current address in a different home than where the reported crimes happened.

According to the documents they were staying in "...a condemned home... with "no electricity, no running water, holes in the ceilings, floor and walls, exposed nails in the floor, with a foul smell, mold with raw meat and perishable food on the kitchen table, and raw meat in the hallway..."

A neighbor told ABC11 that Rebecca Bell lived in the home as a child and that her parents own the home but live in Oklahoma.

The warrants also say the children were exposed to domestic violence and that the oldest, 15, was given alcohol to drink during a Super Bowl party.

In court, the prosecutor told the judge that Michael Bell could be back in court on additional charges.

"Mr. Bell will be having an additional first appearance this week," said prosecutor Melanie Shakita. "The State Bureau of Investigation is going to take out additional child pornography charges later this week. So he'll be back before your honor or whoever is here this week but not as it relates to these."

The expected child-pornography charges do not involve the couple's children.

The children are now in foster homes.