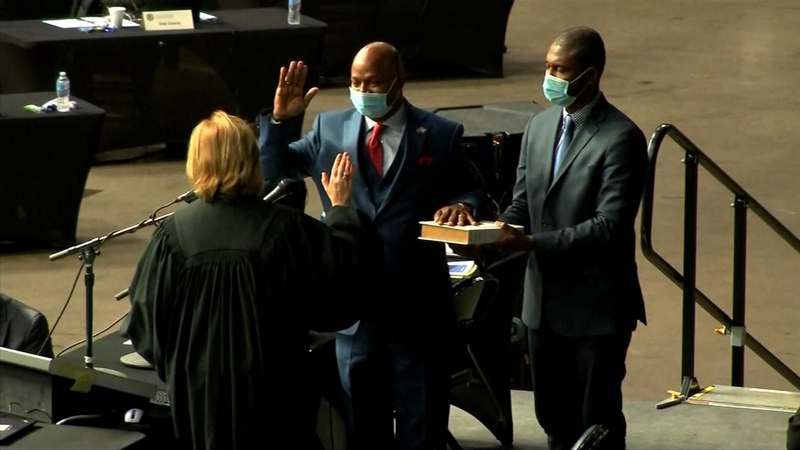 SPRINGFIELD, Ill. (WLS) -- Hillside Democrat Rep. Emanuel "Chris" Welch is the next speaker of the Illinois House, succeeding Mike Madigan, who has held the post for decades.

Welch was elected Speaker when the 102nd General Assembly convened at noon Wednesday.

Welch is the first Black speaker, and takes over for Mike Madigan who has served in that role for all but two years, since 1983.

"As the speaker of this chamber, that's an awesome responsibility. I'm honored, and my commitment is to do it to the best of my ability," Welch said.

BREAKING: Welch secured 69 votes to lock up the Speaker position.

Welch beat out several rivals including two women who vied for the speaker role. It took three caucus votes over the past two days before he was elevated to the leadership post.

After lawmakers were sworn in Wednesday afternoon, Welch was elected with 70 votes, 10 more than he needed.

The new speaker comes at a time when the state grapples with large budget shortfall and economic devastation caused by the COVID-19 pandemic.

"What we have to do is get this virus under control," Welch said. "If we're going to grow our economy properly, we have to admit that the federal government's week-by-week, month-by-month approach to COVID-19 is not working."

Welch called on both side of the aisle to work together.

Madigan announced on Monday he was suspending his bid to get re-elected Speaker after falling short of the required 60 votes during a caucus over the weekend. Wednesday marked 50 years as a state representative for Madigan.

Welch praised Madigan for his contribution to Illinois, but Republican Leader Jim Durkin drew complaints from Democrats when he lambasted Madigan, who leaves the Speaker's office while under a federal corruption investigation of ComEd. He called on Welch to make a break from Madigan's iron fist leadership model.

"I'm going to operate on good faith, but the way that I've seen things happen since the beginning of the special investigative committee till today, and, as I said that I will set the reset button," Mr. Welch is very close to Speaker Madigan," Durkin said. "I am extending the olive branch of cooperation starting today."

Welch received the unanimous endorsement of the House Black Caucus and in the first round of voting by the full Democratic caucus last night received 50 votes.

Wednesday morning a second round of voting gave Welch 55 votes with 17 lawmakers voting present. Madigan did not take part in the voting, but instead remained at the Speaker's office in the Capital where his spokesman said he had begun to gather items to move out.

According to State Representative Mike Zalewski, during a morning caucus, Welch defended himself over allegations that recently surfaced about a domestic violence incident from 2002 involving a girlfriend who told Hillside police Welch slammed her head on a counter after an argument. Welch also addressed a 2010 federal lawsuit by a different woman who alleged sexual harassment and retaliation.

Madigan released a statement Wednesday after the vote saying, "As I prepare to pass the Speaker's gavel to a new generation of Democratic leadership, I want to thank the people of my district and the members of the House Democratic Caucus for the faith and trust they have placed in me over the years. I want to thank my staff for their hard work on behalf of every member of this caucus. It has been the honor of a lifetime to help bring people of different experiences and backgrounds together to serve our state.

"It is time for new leadership in the House. I wish all the best for Speaker-elect Welch as he begins a historic speakership. It is my sincere hope today that the caucus I leave to him and to all who will serve alongside him is stronger than when I began. And as I look at the large and diverse Democratic majority we have built-full of young leaders ready to continue moving our state forward, strong women and people of color, and members representing all parts of our state-I am confident Illinois remains in good hands."

Illinois Republican Party Chairman Tim Schneider released a statement saying, "House Democrats have chosen to go from Mike Madigan, the most corrupt politician in America, to Rep. Chris Welch, a top Madigan lieutenant who has been credibly accused by multiple women in court documents of harassment, assault, and retaliation.

It's now clear that House Democrats are doubling down on allowing Madigan's corrupt machine to continue running state government. In Madigan's stead, they have promoted a serial harasser and assaulter of women. But in spite of that, Welch passed the most important test this fall - he's been a loyal Madigan ally for years but performed most recently as Madigan's human shield in legislative hearings investigating the sweeping corruption scandal that ultimately brought Madigan down.