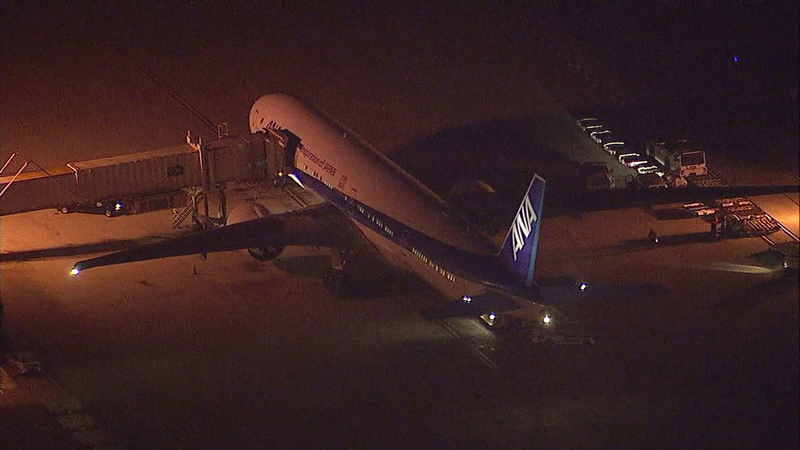 Tokyo-bound flight sent back to LAX

LOS ANGELES -- A flight bound for Tokyo's Narita Airport Tuesday made a U-turn back to Los Angeles International Airport after an "unauthorized person" was discovered aboard in an apparent mix-up.

According to LAX Airport Police, officers had a unit and supervisors on scene when the plane, flight ANA 175, arrived back in Los Angeles.

Police said the return of the Tokyo-bound flight was due to a "mix up and was straightened up."

The airline, All Nippon Airways, issued an apology early Wednesday for the inconvenience. They said they were investigating how the passenger boarded the wrong flight.

The flight was re-boarded overnight and was on its way to Tokyo Wednesday morning.

Model Chrissy Teigen, who was aboard the flight with her husband John Legend, tweeted that she had been on the plane for four hours when it turned around midair.

According to Teigen, passengers were told that the person in question had a ticket on an entirely different airline.

Teigen said passengers were held on the plane for at least 20 minutes after it landed for police to conduct interviews with passengers.

Police were interviewing all the people seated around the mystery person once we got off the plane. Why would they do this! I MUST KNOW MORE

Meanwhile, another passenger snapped a photo with Teigen and Legend, who seemed to be taking it all in stride.

The plane took off from LAX at 11:36 a.m. Tuesday and landed back at LAX at 7:33 p.m. The flight's total duration was recorded at seven hours and 56 minutes.

A flight bound for Tokyo's Narita Airport Tuesday made a u-turn back to Los Angeles International Airport after an "unauthorized person" was discovered aboard.