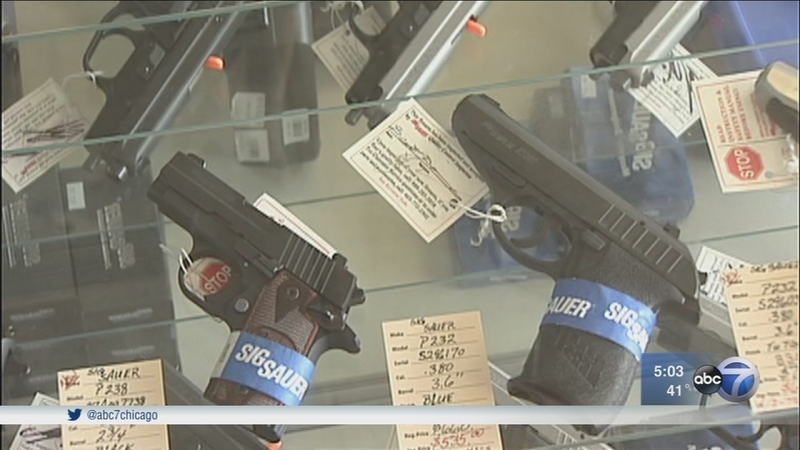 CHICAGO (WLS) -- It happened after Sandy Hook, after Orlando, after Las Vegas just four weeks ago, and now it's happening again.

"I'm angry about this. Aren't we sick of this? Hasn't it been enough? When are we going to start holding our elected officials accountable?" said Colleen Daley, Illinois Council against Handgun Violence.

Others pointed to the man who, upon seeing what was going on, grabbed his own gun to chase down the shooter as an example of why people should be able to own their weapon of choice.

"I support the right of individuals to defend themselves. It's a fundamental right that Texans understand - to defend yourself and your family," said Texas Senator Ted Cruz.

Except what happened in Texas goes beyond the traditional debate, because under existing laws Devin Kelley, who was court martialed in 2012 for domestic violence, should not have been allowed to purchase the AR-556 rifle used in the shooting.

"Nothing came up in his background check that would have prohibited him from buying those guns. It didn't show that conviction from the military," said former ATF special agent Tom Ahern. "That's what needs to be investigated. This disconnect. That information should have been in his history."

Devin Patrick Kelley was convicted of assault against his wife and stepson in an Air Force court-martial in New Mexico in 2012 and served 12 months in confinement before being given a bad-conduct discharge in 2014.

He is the suspected gunman in the attack Sunday in Sutherland Springs, Texas, in which 26 people were killed.

Under Pentagon rules, information about convictions of military personnel in crimes like assault are supposed to be submitted to the FBI's Criminal Justice Investigation Services Division for inclusion in the National Criminal Information Center database.

Acknowledging its mistake, the Air Force said in a written statement that the top two Air Force officials - Air Force Secretary Heather Wilson and Chief of Staff Gen. David Goldfein - have ordered a review of the Kelley case by the Air Force Office of the Inspector General.

And while it wouldn't have prevented this particular kind of incident, gun control advocates in Illinois are headed to Springfield this week hoping to get the House to vote on a measure that would license the state's gun shops.

"Forty percent of guns used in crimes in the city of Chicago come from dealers right here in Illinois. What we know is that states that license gun dealers have seen a 64 percent decrease in inner city trafficking of guns," Daley said.

The Illinois State Rife Association opposes the licensing of gun shops. The bill, which has already been approved by the State Senate, would require gun shop employees to submit to background checks and teach them to identify straw purchases, among other things.