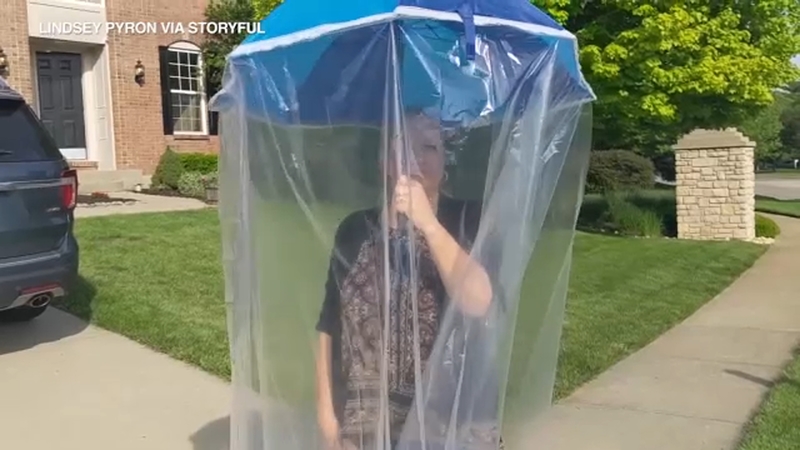 An Ohio woman who says she has "cicada-phobia" after first encountering the bugs 34 years ago has constructed a shield from shower liners to protect against Brood X periodical cicadas now emerging from hibernation across the eastern United States.

Speaking to Storyful, Jane Pyron said she developed her fear when she was visiting her now-husband, Lindsey Pyron, in Cincinnati in 1987. That year, another brood of cicada was emerging after a 17-year hibernation, and Pyron said she was "freaked out and horrified" by the bugs, especially when one flew in her car window.

RELATED: Curious what cicadas taste like? Cicada recipes could help you find out

In a video shot by her husband, Pyron explains how she built the shield using a $5 umbrella, two transparent shower liners, and a stapler, before modeling her protective contraption on a sidewalk.

Pyron said she and Lindsey dated for one year back in the late 1980s, but reconnected three years ago after finding each other on Facebook. They eventually married and Pyron moved to Ohio, but planned to escape to Arizona for six weeks as soon as the cicadas returned. Work got in the way of those plans, Pyron said, but she looked forward to the next emergence. "We will be retired and we can go anywhere in the world that they don't exist!" she said.
Report a correction or typo
Related topics:
pets & animalsohiou.s. & worldbugsbug safety
BUGS
Nest filled with nearly 1,500 'murder hornets' destroyed
Secretly Awesome: Insect-eating Plants
Murder hornets Washington: 1st live insect of 2021 in US spotted
Millions of mayflies invade Wisconsin gas station
TOP STORIES
Fields lead Bears to home opener win against Bengals
Body recovered from Lake Michigan near Evanston beach ID'd
41 shot, 6 fatally, in Chicago weekend violence
Chris Rock says he has COVID-19, urges vaccination
Authorities responding to body found in Wyoming national park
Chicago police fatally shoot man with knife in Englewood
France's Notre Dame cathedral secured at last. Next: rebuild
Show More
Tow truck driver fatally shot in Englewood
2 injured after ejecting from Navy jet near Fort Worth before crash
5 seriously wounded in South Austin shooting: police
Emmys 2021: See the list of nominees
TIMELINE: What happened to Gabby Petito?
More TOP STORIES News