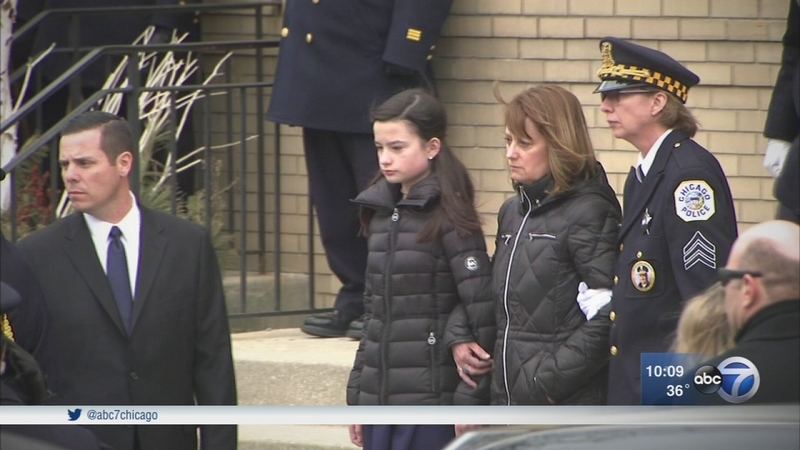 CHICAGO (WLS) -- The widow of a Chicago police commander fatally shot at the Thompson Center in the Loop last week has released a letter thanking the city.

In the letter released on the Chicago Police Memorial Foundation's website Tuesday, Commander Paul Bauer's wife, Erin, thanked all those who have offered support since her husband's murder:

I sit here writing a letter that I never thought I'd have to write. On February 13, my husband and Grace's dad, Paul Bauer, was violently taken from us. Needless to say, our hearts are broken in a million pieces and our lives are forever changed. But that's not the reason I am writing

I'm writing to thank the people of Chicago for the outpouring of love and support at this horrendous time in our lives.

Paul would have been terribly upset that he inconvenienced so many people with the parking restrictions in our beloved Bridgeport. He would have winced at the thought that the Dan Ryan closed down for the funeral procession. He never wanted to be in the spot light. He never thought of himself, only others.

I want to thank those of you (who) waited for hours in the cold to attend his wake and funeral. You have no idea how much that meant to us.

If I wasn't out of tears, I would have cried the entire route to the cemetery. I want you to know that I saw each and every one of you who stopped on the side of the road to salute as the hearse went by. I saw the blue blanket draped over the fence along the expressway and the large banners with Paul's pictures.

The trip down 111th Street stands out in my mind. There were families with small children waiting in the bitter cold to say a prayer, hold a homemade sign or wave a flag. There were young and old. The Chicago Fire Department was there with their trucks, while so many of its men and women saluted as we drove by.

I saw people of every color taking time out of their day, not only to pay respects to Paul, but to the entire Chicago Police Department. They are the men and women who selflessly put their lives on the line each day to protect people they don't even know. They are my new family.

I saw each and every one of you from the darkened window of my car. The good people in this world far outnumber the bad. Grace and I are humbled, as Paul would be.

One man almost stole my faith in humanity, but the City of Chicago and the rest of the nation restored it and I want to thank you for that.

"Erin and Grace have helped prop up the police department. They have. And they truly are the epitome of what is 'Chicago strong,'" said Superintendent Eddie Johnson Tuesday.

Johnson expressed his own gratitude for the flowers, cards and food deliveries for officers that have come from residents and business owners this past week.

"Whoever did what they can do, the fact that they did it, held us in your prayers, trust me when I tell you that is the fuel that is keeping us going," Johnson said. "This is difficult, and it's going to be difficult. It's going to take some time to get back to some sense of normalcy."

CPD officer escorted Grace Bauer to school in the South Loop Tuesday morning, which they plan to keep doing.

Thousands of mourners gathered Saturday morning for Cmdr. Bauer's funeral after he was gunned down last week at the Thompson Center.

More than 400 police agencies were represented, including the Minneapolis and Milwaukee police departments, as well as departments throughout the Chicago area.

"He understood that there's no greater compliment than a compliment that you get from your officers," said CPD Captain Mel Roman.

"Paul, I'm going to miss you," Johnson said. "And while there are no words I can say to describe the depth of my gratitude, I just want to say thank you."

"Chicago is blessed to have known and been served by Paul Bauer. Chicago will never forget his grace and his goodness," Emanuel said.

Archbishop Blase Cupich sent a letter to Bauer's family, which was read by Rev. Joe Altman, in which he called Bauer a hero and told them that they are not alone, as Chicago mourns with them. The letter said that Cupich wanted to attend, but was recovering from the flu, but said he would visit them soon.
The public was encouraged to participate by lining up along the procession route and wearing blue, and thousands came out with flags and signs. 1,000 vehicles led the way for Bauer's hearse.

"He seems like someone who wasn't looking for a lot of glory," said Bridgeport resident Alanna O'Connor, who attended the procession. "He was just serving. It makes me immensely proud of this neighborhood and this family and this city."

The procession traveled proceed west on 37th Street, south on Halsted Street, east on Pershing Road, to 90/94 East to I-57 South to 111th Street.

"The entire community is out here to support everyone," said Bridgeport resident Tim Heise. "One of the greatest things I saw yesterday.There was a rainbow of every color police cars in Illinois, lined down the street, which was pretty spectacular."

Among those officers was Kankakee Sheriff Mike Downey. Downey said he had never met Bauer but would not have missed his memorial. 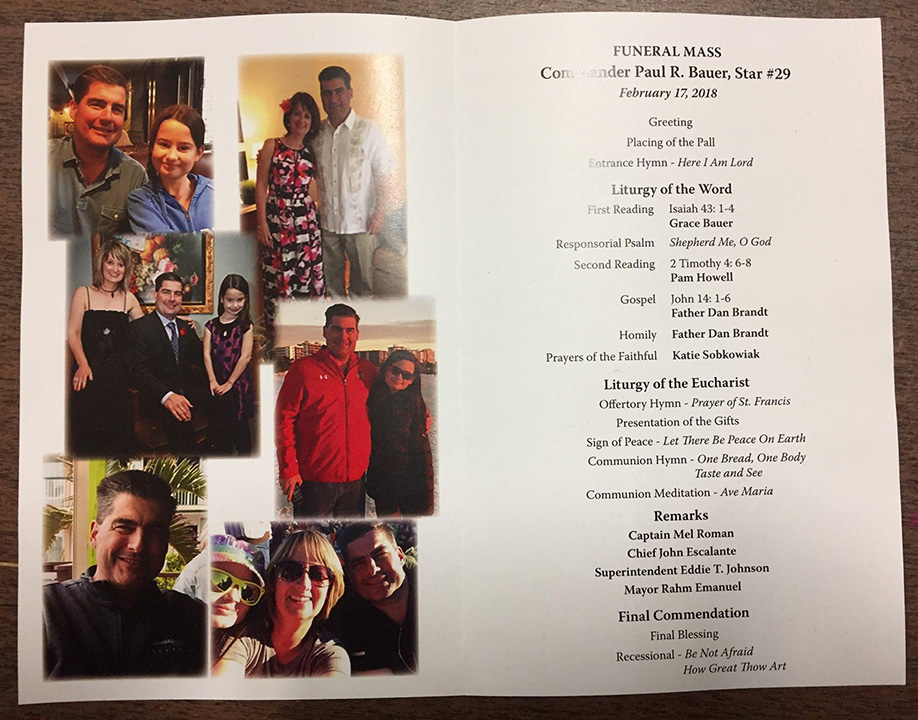