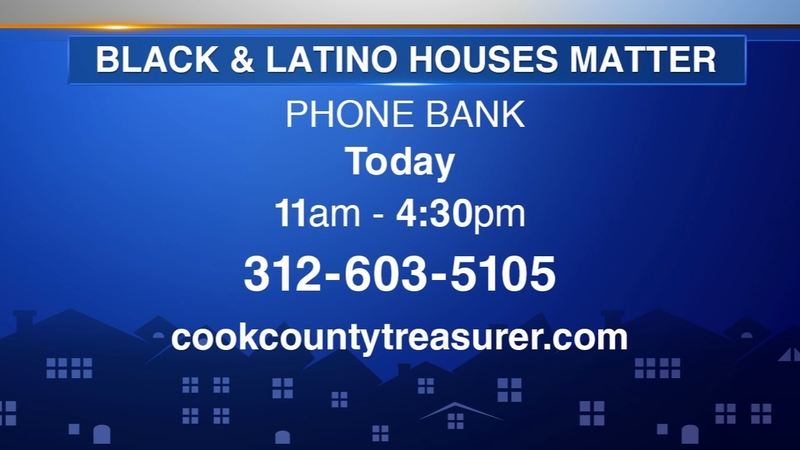 This Black and Latino Houses Matter Phone Bank has connected homeowners to $26.4 million. The previous five have led to $23 million in exemptions and refunds.

Hundreds of thousands of homeowners called and $3.3 million was claimed on Wednesday.

WATCH: Dolton woman gets $11K thanks to Black and Latino Houses Matter

One woman in Dolton discovered she was owed $11,000 on Tuesday.

Between high gas prices, sticker shock at the grocery store and just about everything going up. Dolton homeowner Sandra Davis is one of many who's feeling the pinch.

"There's so many hurting people out here," Davis said. "This inflation is hitting everyone. I don't care what color you are I think it's hitting every family."

That, on top of property taxes that continue to go up in Cook County, money is tight. But Davis had no idea she had thousands of dollars out there waiting for her to claim it.

The goal is to prevent residents from losing their home due to unpaid property taxes and connect them with their property tax refunds and exemptions.

"This is a very depressing time in human history," Pappas said. "We have wars, we have inflation, we can't get baby formula, people can't pay their taxes. So, you know what? Maria Pappas is going to make people happy, and that's what we do."

While anyone can call in to the phone bank, Pappas is focusing on the Black and Latino communities because these two groups in Cook County are at the greatest risk of losing their home.

"The most properties on the tax sale list are Black and Latino, 75%," Pappas said. "So these are underserved residents who are somehow left by the wayside. So, part of Black and Latino Houses Matter is that this that this house is tendered to the next generation. And you can't substantially build communities in Chicago unless that happens."

But Pappas decided to take her phone bank initiative a step further. She visited churches in Black and Latino communities to let homeowners know about the phone bank-and that's where she met Ms. Davis.

And after filling out the paperwork, Davis received a calling saying she missed four years' worth of senior exemptions. The grand total blew her mind.

A happy homeowner who's hoping others will call in.

Ms. Davis says she's using that money to pay off bills and she treated herself to a couple of seafood dinners, too.