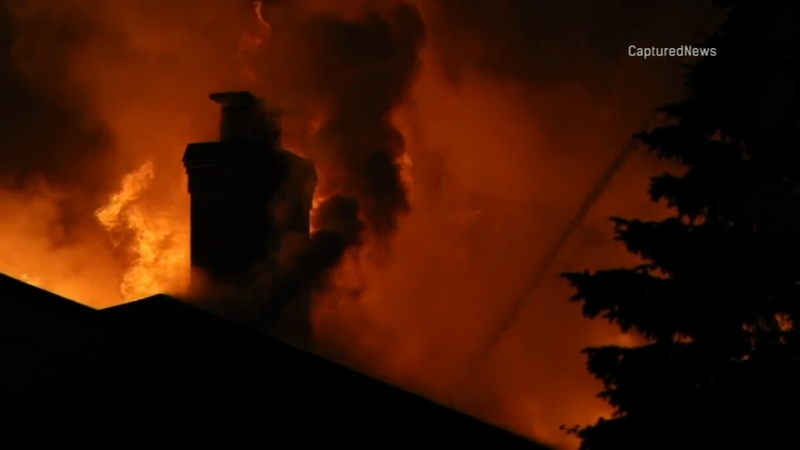 Firefighters were called to the fire at the apartment building in the 500-block of Devonshire Lane at about 3:08 a.m. The fire was elevated to a three-alarm fire as flames were seen shooting through the roof.

Dozens of residents were evacuated from the building and no residents or firefighters were injured, fire officials said.

"It was a pretty heavy effort to make sure that the building was clear," said Crystal Lake Deputy Fire Chief Chris Olsen. "At the same time were trying connect to water supplies get our hoses deployed and get water on the fire."

Olsen said heavy smoke and fire were coming from the roof of the building and the residents said the flames moved fast.

"It was just like, really smokey when we got into the halls and we didn't realize how big it was or whatever," said resident Corey Craycraft. "It wasn't really that big when we got out, but it spread really quick like across the roofs and stuff."

The fire was brought under control at about 5:20 a.m.

Many residents said if they didn't wake to a smoke alarm, they woke up to firefighters furiously pounding on their door.

"I was terrorized because I can't walk far and they had my walker," said resident Joan Kujawa. "I'm so grateful. I really am just so grateful."

"As soon as I open the door, there was a police officer there who was like, 'the building is on fire, get out," said resident Ashley Zozokos.

It is not known what caused the fire, but is not believed to be suspicious in nature. The building has been deemed uninhabitable due to the damage.

Thanks to a local church across the street, those evacuated from their homes were able to seek shelter as firefighters worked to stop the flames.

"It's heartbreaking," said Pastor Nathan Bargo of Real Life Church of the Nazarene. "It's a shame to see their homes destroyed and the things that they held dear are not there anymore."