Anyone with information in this case should call 765-822-3535 or submit tips by email at abbyandlibbytip@cacoshrf.com
WLS
By ABC7 Chicago Digital Team 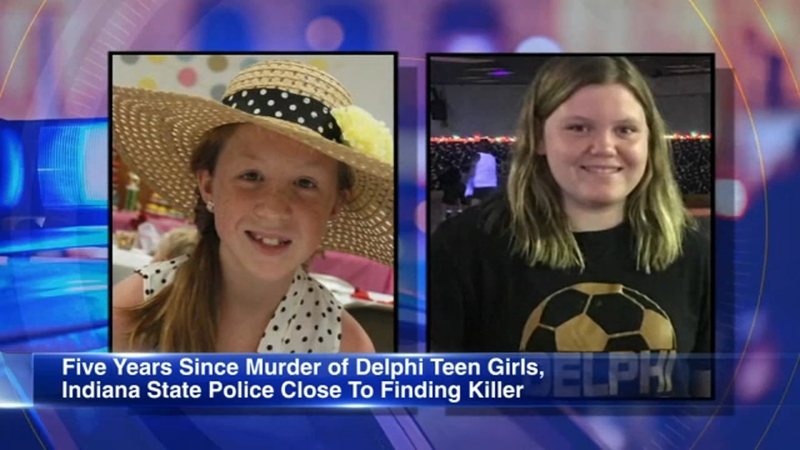 In was on this day in 2017 when investigators say 14-year-old Libby German recorded a video of the alleged killer while the girls were hiking at Delphi Historic Trails in Indiana.

The girls were reported missing after they didn't show up at a designated meetup time, and an extensive search ensued. Their bodies were found the next day in a wooded area near the trails, about a half-mile upstream from where they had been dropped off.

The images in the video are believed to have been taken just before German and 13-year-old Abby Williams were murdered.

Police released new video of the suspect in the murder of two teen girls in Delphi, Ind. in 2017.

In the video, the person can be heard telling them to go "down the hill."

German's grandparents believe the teenager knew something wasn't right with the man she encountered, and that's why she recorded him.

Their killer has been at large ever since.

Police said earlier this week that they may be close to cracking the case.

In December 2021, Indiana State Police announced that they had uncovered a fictitious online profile and are asking for help identifying the person who created it.

Police said the profile "anthony_shots" appears to have been used from 2016 to 2017 on social media apps, including but not limited to, Snapchat and Instagram. The profile allegedly used pictures of a known male model, who is not a person of interest in the investigation.

State police said the use of the photos is "crucial" to their investigation, which is why they released the images to the public. They need to locate others who may have interacted with the anthony_shots profile during 2016 and 2017.

The unknown creator of the fictitious profile allegedly used it to communicate with juvenile girls to solicit nude images, obtain addresses and attempt to meet them, police said.