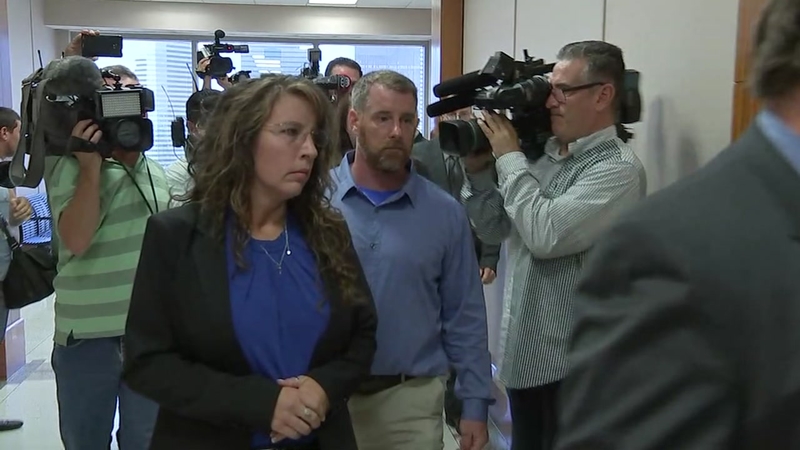 HOUSTON, Texas -- More than two weeks after the deadly altercation outside Denny's, Chauna and Terry Thompson arrived in court for their first appearance Tuesday morning.

The court appearance lasted only a few minutes but bond conditions were set. The judge ordered that the Thompsons have no guns, no contact with the Hernandez family and will undergo random urine tests while out on bond.

They are facing murder charges for the death of 24-year-old John Hernandez.

The incident took place May 28 at a Denny's restaurant in Sheldon, an unincorporated community in northeastern Harris County.

Deputy Thompson and her husband are seen walking outside the courthouse.

RELATED: Denny's chokehold fight saga: Everything you need to know


Forensics examiners have since ruled his death a homicide, saying he died from anoxic encephalopathy or lack of oxygen to the brain, due to strangulation with chest compression.

A week later, harrowing eyewitness video emerged that gave investigators -- and the public -- a closer view of the melee that eventually claimed Hernandez's life.

Upon the video's release, Terry Thompson's attorney Scot Courtney said the footage did not paint a complete picture of what occurred and maintained that the Thompsons did nothing illegal.

For Hernandez's family, the first break in the case came on June 7, when the Harris County District Attorney's Office announced that it would present the case surrounding Hernandez's death to a grand jury.

RELATED: Wife of Denny's fight victim said she was held, questioned for hours

The family has raised concerns that homicide investigators were not called to the scene of the fight despite the grave nature of Hernandez's injuries.

The family of John Hernandez has filed a civil lawsuit against Terry and Chauna Thompson.