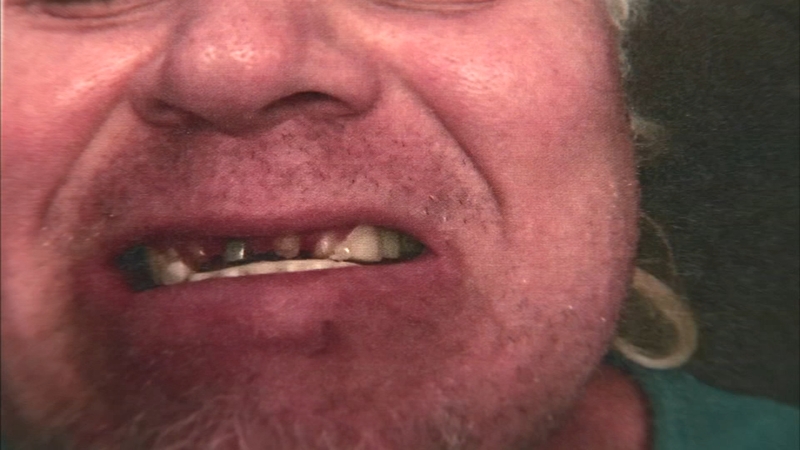 OAK BROOK, Ill. (WLS) -- Several patients of a dentist in Oak Brook, who dug deep into their pockets to pay for crowns and implants, said they were left unable to eat normally or even smile after his work.

Dr. James D'Alise faces six criminal charges for operating without a license, but he had his state license revoked well before those charges were filed.

The I-Team uncovered stories from patients who say they paid tens of thousands of dollars and were left waiting with a mouthful of problems.

"Crazy Glue, Fixodent, that's been my life for three and a half years," said Jim Wadas.

The teeth Wadas struggles with were supposed to be temporary, but after three-and-a-half years, he said those temporaries have turned into a permanent discomfort.

"Every day I probably glue them in and out," Wadas said. "I've probably re-glued them over 300 times."

Wadas survived throat cancer, and his radiation treatment necessitated the removal of his teeth. As such, he needs implants and crowns. He said he has been trying to get them from D'Alise and his staff since June 2016.

"One year. He told me in a year I would be done completely," he said. "Never happened."

Wadas was a patient of D'Alise and his practice A Center for Dental Implants in Oak Brook.

"Cancer's a bad thing to go through, but as far as being close to that, it's got to be what he did to me," Wadas said. "The pain and suffering I went through for three years with that guy is unbearable."

In August, Oak Brook police arrested D'Alise. He was charged with six counts of unlicensed practice for allegedly providing dental care to Wadas and five other patients, while having a revoked state license. His Oak Brook office is now closed.

The I-Team found that D'Alise's dental license and controlled substance license were revoked by the state of Illinois in July of 2018, more than a year before the arrest.

Abundis said those licenses were revoked as a result of a consent order.

"Dr. D'Alise entered into a consent order with the department basically agreeing that his license would be revoked," she explained. "He had two licenses; a dental license and a controlled substance license."

That consent order outlined 27 allegations from patients including "substandard treatment" and "services not rendered." One patient said he was owed $20,000 for implants which were never done.

The IDPFR order also said D'Alise wrote 55 prescriptions for controlled substances while his license to prescribe was expired. At a recent court hearing he entered a plea of not guilty.

Several angry patients and their families showed up to the September criminal court hearing, including Thomas Denny.

"I've had this for five months now," Denny said, showing the I-Team his dentures.

Consumer Investigator Jason Knowles caught up with D' Alise at a court hearing this week and his attorney offered no comment. The I-Team provided D'Alise and his attorney with a list of patients making allegations in this story.

"I was devastated," Gutt said. "You know, like I said. He put implants in, they'd break in two or three months, he'd dig them out put new ones in."

Nancy Howley said she's a new patient and showed the I-Team payments for about $2,500.

Ralph Amadeo said he paid $24,000 in full for implants and still needs work to be finished.

"It's been horrible, I don't go out anymore. We rarely go out to eat in public, I just I'm not comfortable with the way I look and the way I speak in order to have the confidence of going out and speaking with people," he said.

"These are actually temporary plates," Amadeo added. "I'm supposed to be fitted for new plates on both the top and the bottom but that's not happening now."

"I couldn't understand how he was able to continue to practice," attorney Anthony Blumberg told the I-Team.

Blumberg represented several unhappy patients since 2009 and provided the I-Team with several settlements. He now has questions for IDFPR.

"Many of my clients reported Dr. D'Alise to the Illinois Department of Professional Regulations," he said.

The I-Team asked IDPFR about that criticism.

"I would say that these cases are complex, that our investigators they're diligent, they do what they can, they work in coordination with our dental coordinator," replied Abundis. "We have a board, the Board of Dentistry, that also advises us to how these complaints are to be resolved."

The acting director of the division of professional regulation within IDFPR said it's hard to prove that the agency did or did not act on complaints because all complaints against doctors and dentists are confidential and, by law, cannot be disclosed. Only actions taken by IDFPR are made public, which for D'Alise included probation and a past suspension.

According to those records, there have been actions against D'Alise for more than 15 years. What's not known is when the first complaint was filed, which is not public per the statute.

Patients questioned that system and Wadas said he's left wondering how to pay for a second round of implants and crowns so he can eat properly and feel good about his smile again.

"I still have temporary teeth now," he said. "Basically, I've got nothing. Nothing but grief, heartache, aggravation, anxiety, the whole deal."

If you feel complaints about medical professionals should be made public, you can call lawmakers about complaints not remaining confidential.