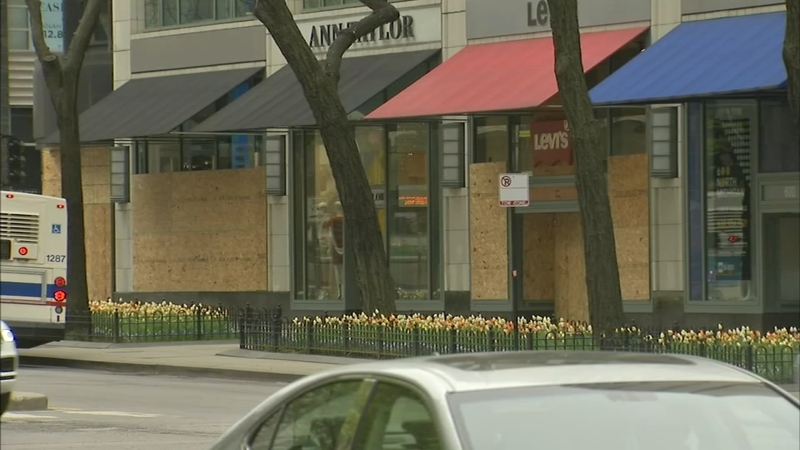 CHICAGO (WLS) -- The streets were quiet in Chicago after former Minneapolis police officer Derek Chauvin was convicted of murder in the death of George Floyd, with the overwhelming sentiment expressed appearing to be relief and righteousness.

On Wednesday morning, people had had more time to think about the verdict and take things in. Many said they were moved to tears.

Chrishelle Green-Rogers talked about the verdict with a friend on her walk to work Wednesday morning. She said she's more emotional after having a chance to sleep on it.

"Honestly I didn't cry until this morning. I have a son and I'm always worried, but today is more emotional because I was actually working from home yesterday," Green-Rogers said.

Many recalled where they were and how they felt as the nation held its breath when the judge in Minneapolis read the jury's decision.

"I think that we're going in the right direction, you know, this has been happening a lot, ever since I was a little girl, and I think that it's time," she said.

Oscar Griffin was in his office when he heard the news. Now, he's hoping to see police reform.

"We need police, but we need the right policing, and we need the training that they actually get in the academy to be exercised on the street," he said.

Jill Jin said she felt like there was a sense of "collective relief" over the guilty verdict.

Some say while it restores hope in the justice system, they believe the charges for Derek Chauvin could have been even tougher.

"For me, I am overall happy, but I think that maybe he deserved more," Ti Chesley said.

"So I was just so happy, I mean I just cried, and I feel the same way now," Vuinovich said. "I get teary when I think about it because we ended the war in Vietnam, and everybody said 'no it could never be done,' but protests, peaceful protests, do things."

The Chicago Alliance Against Racism and Political Repression also held a rally at 9 a.m. Wednesday across from City Hall, calling on the Chicago City Council to pass an ordinance that would give communities more say in policing in their neighborhoods.

Activists are promising to keep marching ahead in their fight.

National Guard called in, downtown businesses board up ahead of verdict

Many downtown Chicago businesses were already boarded up early Tuesday morning, and additional plywood could be seen as the day went on. It's not clear how long the windows will remain blocked.

At the request of Mayor Lori Lightfoot, Pritzker said he would deploy 125 National Guard members to stand by to support the Chicago Police Department, beginning Tuesday.

Soldiers assigned are from the 33rd Military Police Battalion and are specially trained in riot control operations, the statement said.

Derek Chauvin guilty on all counts (1 of 12)

ISP told the I-Team they're in contact with the Chicago Police Department to help with peaceful protests and keep the community safe. They have not been asked to help in Minnesota, like some other nearby states have.

Some businesses along the Magnificent Mile and elsewhere in the city have been boarded up since last Thursday, when video of the fatal Chicago police shooting of 13-year-old Adam Toledo was released.

Chicago's Office of Emergency Management and Communications also prepared for the jury's decision, but said there's "no actionable intelligence at this time."

Lightfoot commented on her request for guard troops at an unrelated news conference Tuesday morning, saying "we learned a lot over the course of last summer and fall about additional things we needed to be doing. Last week we activated our neighborhood protection plan, which puts officers on high alert. They are very visible."

Black and Latinx organizers condemned the mayor's plan to install National Guard troops ahead of the verdict.