No more 'dibs' on Chicago streets 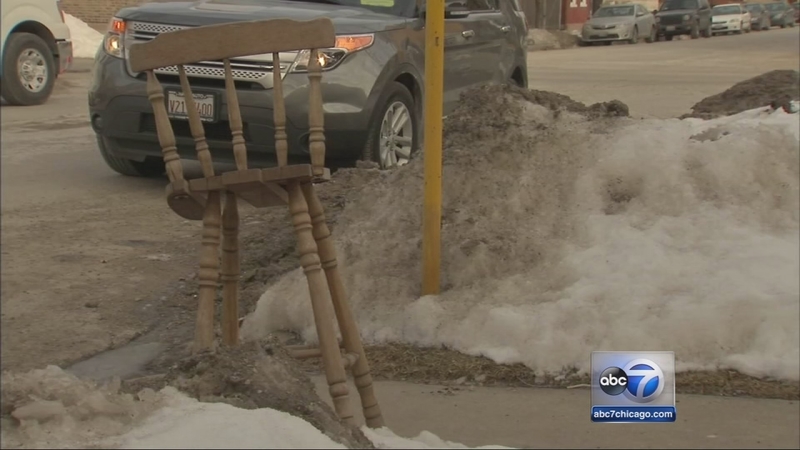 CHICAGO (WLS) -- The practice of using chairs, tables and other items to reserve shoveled out street parking is officially over - until the next big snowfall. Department of Streets and Sanitation crews started removing "dibs" items from Chicago streets Friday.

The longtime time Chicago tradition comes about each winter there's a heavy snow. More than a week ago a blizzard dumped several inches on Chicago streets, and it wasn't long before drivers started using whatever was around to mark the spots they shoveled out.

"One of my cones is missing," Gus Oliva said. He shoved out a spot in Bridgeport. "I cleaned it out. I cleaned this spot for my mother-in-law, and I cleaned that spot over there for my son."

Oliva would like city crews to give "dibs" a little more time for the snow to melt. So would Bob Sadowski in Rogers Park on the city's North Side. He suggests "dibs" stay in effect until March 1.

That's not going to happen. The city warned residents that anything obstructing the public way will be hauled away. That's a lot of trash.

The cleanup is starting in neighborhoods where calls to 311 are reporting the trash. Drivers might want to avoid "dibs" spaces until the city removes all the markers. While saving a "dibs" spot isn't legal, it is a Chicago practice that's taken seriously by some. Ashley Mater's Nissan was vandalized after she parked it in Logan Square.

"I don't know if it's "dibs" or a random act of crazy proving something. I don't know," she said. "I know I saw some chairs discarded sort of near, but not really. It wasn't in that spot area, it was just sort of around. I was like, 'Someone seriously blew up my car over a dibs spot that was not really even shoveled all that much?' After all, the snow's already melting,"

There have been several reports of vandalism to vehicles that took up "dibs" spots.