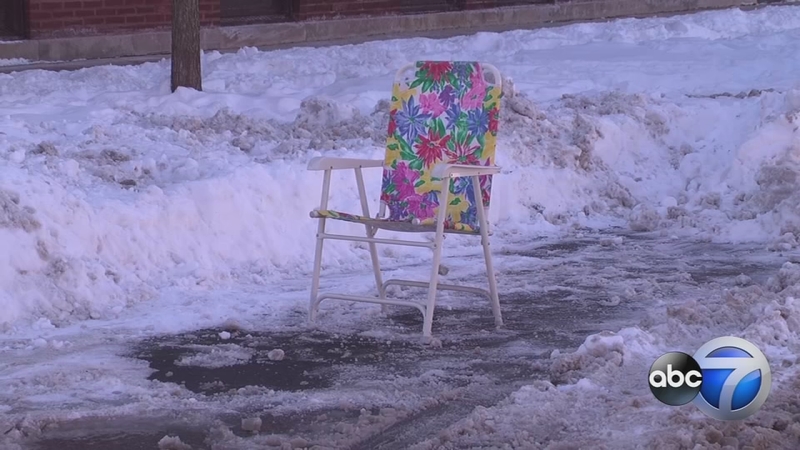 CHICAGO (WLS) -- After a snowy week in Chicago, even as the city began to thaw, there was still plenty of slushy, frozen mess clogging Chicago streets to make some parking spots tricky to maneuver. As a result, cleared street space is precious real estate.
In Chicago, the legend goes, if you dig a space out you can call "dibs," planting your flag of choice on hard earned turf.

People will use just about anything to mark their parking spot. Chairs, buckets, tree planters and trash cans line neighborhood roads. Some dibs devices are hard to recognize as anything else.
For one West Town driver, a stick kept people at arm's length by leaning on another stick that's duct taped to a bucket of paint atop plastic drawers.
Down the block, a traffic cone stood guard. It was stamped "property of People's Gas," but tradition says the parking spot belongs to someone else.
For each dibs'd spot, many more people seem to have just given up on using their cars until the snow melts; several vehicles are still buried in untouched snow.

One West town resident decided to try her hand at the Chicago tradition for the first time Monday, using a broom and luggage stand to say dibs.
There are still hold outs, like Kayla Kennedy, who dug out her third spot in recent days Monday afternoon. She had a message for all Chicago drivers.
"If everyone took the time-everyone-to shovel out their car completely before they left, then the whole street would be clear," she suggested, pointing out that then there wouldn't be a need to reserve a spot.
But for now, we're left with a patchwork of semi-shoveled side streets and a showcase of temporary public artwork that goes by one name: dibs.
Report a correction or typo
Related topics:
societychicagowest townlakeviewcarchicago dibsdriving
Copyright © 2022 WLS-TV. All Rights Reserved.
CHICAGO DIBS
Chicago parking spot 'dibs' to be cleaned up
Chicago parking spot 'dibs' almost over
Heavy snowfall brings 'dibs' back to Chicago streets
No more 'dibs' on Chicago streets
TOP STORIES
4th of July fireworks displays across Chicago area | See full list
40 shot, 7 killed in July 4 weekend violence since Friday evening: CPD
Girl, 6, critically injured after struck by teen riding electric bike
Jayland Walker was unarmed when 8 Ohio officers opened fire on him
CPD suicide: Officer ID'd by medical examiner
31 bodies, some decomposing, found at Indiana funeral home
647 people drown each day. Here's how to avoid being one of them
Show More
Man charged with shooting, killing high school student on SW Side
Couple gets $1.5K fine for parking in their driveway
Waukegan 4th of July parade returns in-person, honors first responders
Thousands of dead anchovies wash ashore, fall from sky in California
3 dead, 3 critically wounded in Copenhagen shopping mall shooting
More TOP STORIES News