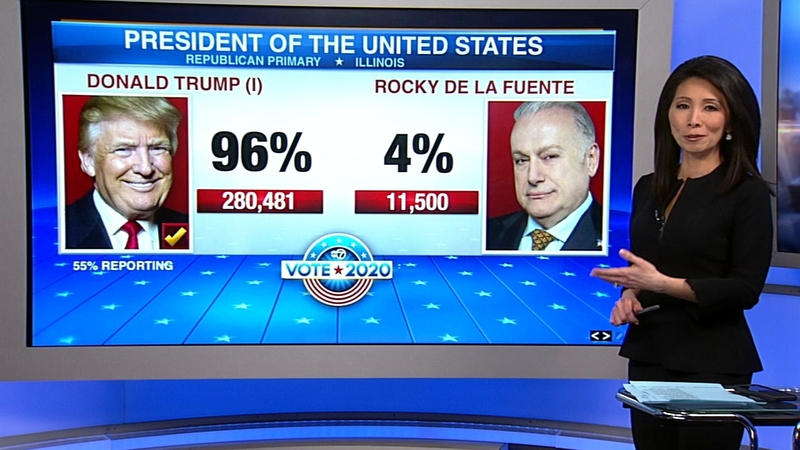 Trump, who had only token opposition, now has more than the 1,276 delegates needed after winning Tuesday's Florida and Illinois primaries, according to The Associated Press' delegate count.

This is the earliest the delegate calendar permits a Republican to clinch the nomination.

"Republicans and President Trump's supporters have been just itching to get involved in the process that will end with his reelection in November," Murtaugh said.

Regardless of the order of the race calls, Trump's campaign intended to credit Florida for putting him over the top as it tries to highlight a state that was crucial to Trump's 2016 victory and will likely be required for him to win again in 2020.

The president had accumulated all but one of the available delegates this primary season, with former Massachusetts Gov. Bill Weld winning a single delegate in the Iowa caucuses.

That lone Weld delegate can now vote for Trump if he is the only candidate nominated, according to GOP rules.

Trump's re-nomination came much faster than in 2016, when he passed the magic number in late May in North Dakota. Trump marked the occasion with a news conference in Bismarck, during which he shook hands with the two delegates who had carried him over the threshold.

Besides the lack of big-name opponents, Trump was bolstered by rules changes in the Republican nominating process that the White House had aggressively pushed, including canceled primaries and caucuses long before the coronavirus pandemic, higher thresholds to get delegates and more winner-take-all contests.

"The rules were tweaked in a big number of states to make it much harder for the also-rans for the nomination to compete in any meaningful way," said delegate expert and political scientist Josh Putnam of Frontloading HQ.

But it also "speaks to something we kind of knew going into this," Putnam said. "The party, at least the folks opting to turn out to vote, were unifying behind their president."

Trump is deeply popular within the Republican Party despite his overall low job approval numbers, and his campaign has been in general election mode since Trump filed for reelection back in January 2017.

The results come as Biden and Sanders continue their fight for the Democratic nomination, despite Biden's commanding lead.

While securing the nomination before his eventual Democratic rival "in regular times would be a decent advantage" for Trump, the novel coronavirus pandemic that has upended American life could change that, Putnam said.

Trump can no longer hold the signature mass rallies that have fueled his campaign and the economy is now in free fall. But Murtaugh argued his team is better equipped than Democrats' for a virtual campaign thanks to a data advantage fueled, in part, but years worth of rallies that serve as voter information collection powerhouses.

"The amount of work that we can do digitally and virtually can't be matched by the other side," Murtaugh said.