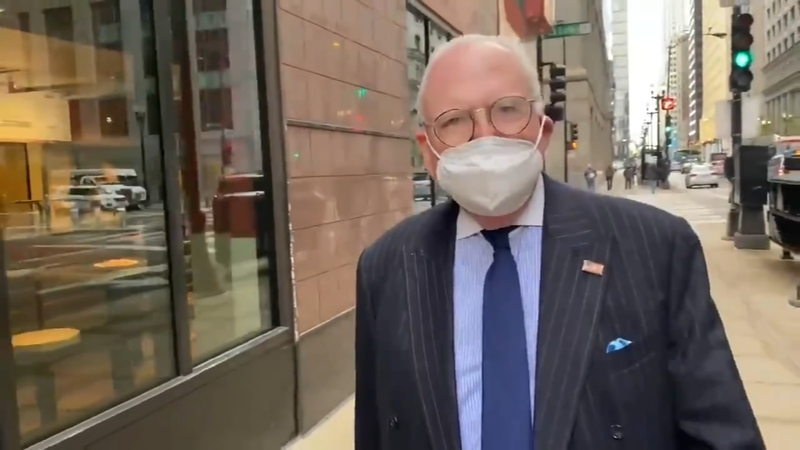 CHICAGO (WLS) -- The feds are revealing new details in their investigation of 14th Ward Alderman Ed Burke, including transcripts of what Burke was allegedly heard saying on wiretapped phone calls.

The embattled alderman refused the chance to respond to a new, 220-page federal filing in the corruption case against him as he walked out of Chicago City Council's first in-person meeting in more than a year.

Federal prosecutors accuse the former chair of the city's Finance Committee of being "thoroughly corrupt and worthy of prosecution." They say Burke abused his office for personal gain, and time and time again, they wrote, Burke "shamelessly tied official action to his law firm's receipt of business."

"Really, there's some damning words in this, specifically, you know, the bell hasn't been rung yet as to why certain acts weren't been taken. I mean, that's a billboard for public corruption you could put on any street going into Chicago," former federal prosecutor Jeff Cramer said.

The longtime 14th Ward alderman was indicted in 2019 on more than a dozen counts of financial crimes including racketeering and attempted extortion. The feds accuse Burke of trying to monopolize an $800 million renovation of the Old Chicago Post Office. Even under federal indictment, the city's longest-serving alderman refuses to resign.

"I just think there's no place in public life for somebody like him, who has used his office in a corrupt fashion, who has cost the taxpayers of this city untold tens of millions, if not more, dollars," Mayor Lori Lightfoot said.

Former Ald. Daniel Solis resigned just before prosecutors charged Burke in 2019. It was then revealed Solis had worn a wire to help the feds make their corruption case.

Wednesday's filing detailed a recorded conversation in which prosecutors said Burke used a racist trope describing his belief on the business practices of Jewish people.

"But for the cooperator, the argument goes, Ald. Burke would not have done anything wrong," Cramer said. "The cooperator needed to make a deal, he needed to bring in someone bigger than he was, and that's Ald. Burke."