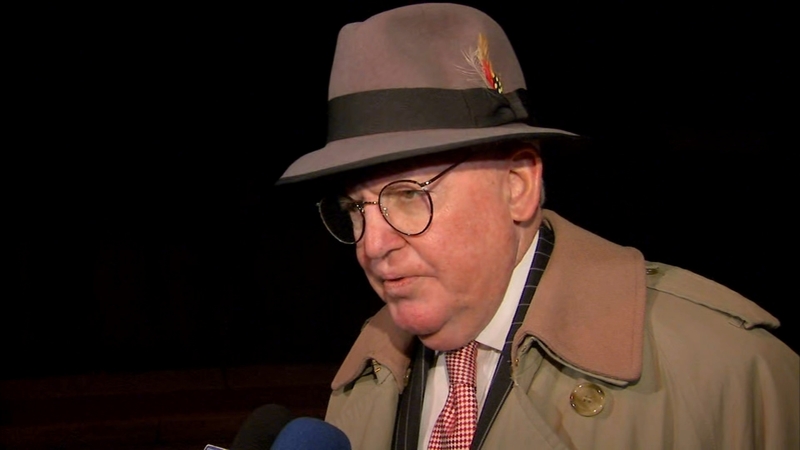 Burke spoke briefly to press upon arriving outside his home Thursday evening.

"I'm not guilty of anything, and I'm trusting that when I have my day in court, that will be clear beyond a reasonable doubt," he said. "I look forward to trying this case in court. I've done nothing wrong."

The complaint alleges Burke tried to extort a company that owns a chain of fast-food restaurants in the Chicago area. That company was seeking permits for a remodeling job.

In exchange for help to get those permits, Burke allegedly wanted the company to use Klafter & Burke, which specializes in property tax appeals, for that business. When the company refused, Burke allegedly ordered the remodeling work to stop. Authorities said Burke threatened to "play hardball" initially when they declined.

The ABC7 I-Team confirmed the restaurant in the complaint is the Burger King located in the 4000-block of South Pulaski Road, which Laquan McDonald passed by before he was shot by Jason Van Dyke in 2014.

The complaint also alleges that Burke illegally solicited a campaign donation for another unnamed politician from one of the company's executives.

Preckwinkle released a statement saying, in part, "In 2017, the Burkes and Gerry Chico [sic] volunteered to host a fundraiser for my Cook County board campaign. As event hosts, they were solely responsible for organizing and fundraising of this event. Today, it has come to my attention that at that time an individual attempted to contribute through my website. This contribution was not accepted. My campaign has never been contacted by the authorities, and I am confident that my staff followed proper protocol."

Toni Preckwinkle's campaign for mayor found itself tangled up in the charge against Ed Burke Thursday afternoon.

However, the latest finance report filed to the Illinois State Board of Elections for the Preckwinkle campaign shows a $10,000 contribution to Preckwinkle for President. The report was amended at 7:05 p.m. Thursday, adding the clarification "of rejected contribution from Shoukat Dhanani."

The ABC7 I-Team reached out to the Preckwinkle campaign, who responded: "Although the contribution was rejected, out of transparency we filed this amendment to show that."

Chico released a statement in response to Preckwinkle, saying, "In typical fashion, Toni Preckwinkle is being dishonest about her role outlined in a criminal complaint and deflecting responsibility. She personally called me and solicited a donation and requested that I help her raise money. I, along with dozens of others, was present at the event where I contributed $750. Let me be clear, I have no knowledge whatsoever about the $5,600 contribution that she accepted and is referred to in the criminal complaint."

"I think she's got to explain to the voters of this city whether or not she was the recipient of that extorted campaign donation," said mayoral candidate Lori Lightfoot.

"A lot of the other candidates have significant ties to Alderman Burke and therefore ties to corruption, so the question Chicagoans will be asking is can we trust individuals that came out of that same establishment," said mayoral candidate Amara Enyia.

"It's really time to vote the bums out," said mayoral candidate Paul Vallas.

The evidence against Burke, in addition to what federal agents gathered during the raids, includes wiretaps from his cell phone, email and other documents.

"On the one hand you have recorded cell phone conversations, which is always very strong evidence. You have the defendant speaking in his own voice," said ABC7 Legal Analyst Gil Soffer. "But on the other hand you've got some work the government will need to do to stitch together these calls and link in other evidence, other testimony to tell the full story. So I think there's room here for a capable defense lawyer to put up a fight."

Wearing a dark pinstriped suit and his signature fedora, Burke entered the front door of the Dirksen Federal Building around 2:15 p.m. Thursday. He went through security and headed upstairs to face a federal magistrate. If convicted of attempted extortion, he could face a maximum of 20 years in prison and a $250,000 fine.

"The transaction described in the complaint does not make out extortion or an attempt to extort. We look forward to a prompt day in court to prove the innocence of Alderman Burke," said Charles Sklarsky, Burke's attorney, outside the Dirksen Federal Building.

Burke posted a $10,000 appearance bond following his court appearance. He cannot use or obtain a passport or travel document under the conditions of his bond, but is allowed to travel between the northern district of Illinois and his home in Powers Lake, Wisconsin.

Burke is also not allowed to possess a firearm or weapon. His attorney told the court he has 23 firearms and the judge instructed him he has 48 hours to dispose of them. Prosecutors said the guns were found in Burke's offices.

Burke is also barred from having any contact with any of the officials listed in the court complaint. He will next appear in court for a preliminary hearing on January 18.

Burke, who recently turned 75, is running for a 13th term as Chicago alderman. He was elected in 1968 after his father, Alderman Joseph Burke, died in office. He has served as Finance Committee chairman for the last 30 years.

Mayor Rahm Emanuel's office released a statement saying, "Based on what we've seen in the complaint, the mayor believes it is unacceptable for him to continue as chairman of the Finance Committee."

The charge came five weeks after the FBI conducted two raids on his aldermanic offices.

Federal agents executed two search warrants on Nov. 29, papering over the doors and windows of Burke's City Hall office and taking computers and files from his 14th Ward office on the Southwest Side. The FBI returned to his City Hall office on Dec. 13 for further investigation.

The alderman has been able to weather federal investigations before, but this is the first time he has been charged.

Ed Burke's 14th Ward political challengers are calling on him to resign and to withrdraw from the election as they promise to bring change to the ward.

Burke has often been unopposed over his 50-year reign, but not this time; this year he faces four challengers.

Tanya Patino is one of them. She was embarrassed to hear of the attempted extortion charge, though not exactly surprised.

"It's an embarrassment to know that your alderman is doing things for his own personal gain instead of the community's interest. He's gone through many of these investigations and it finally caught up with him, so I'm not surprised," she said.

The other candidates running against Burke are Jose Luis Torres, Jaime Guzman and Irene Corral.

"We hope it brings about the necessary change, it has been a long time coming. We are running on a platform of transparency so we're not going to allow this to ever have to be an issue in the 14th Ward again," said Angela Chavez, representing candidate Jose Luis Torres.

ABC7 Eyewitness News reached out to Guzman and Corral's campaigns but did not receive a response.

Burke's ward office on 51st Street was closed for business, and many in the community were reluctant to speak about the powerful alderman.

"I hope that it's not true, but it doesn't surprise me at all with, I guess, Chicago politics and, I guess, the stuff that goes on in Chicago. But I hope it's not true," said Monique Esparza, who stopped by the closed ward office for assistance

Patino has been endorsed by Chuy Garcia, who was sworn in as the congressman for Illinois's 4th District, replacing longtime representative Luis Gutierrez, Thursday morning. Garcia stopped to comment on Burke's charge and to endorse Patino once more on his way to a celebration in Washington, D.C.

Ald. Ed Burke's challengers and U.S. Rep. Chuy Garcia said the charge against him confirms it's time for a change in leadership for the 14th Ward.

"Well, there were many signs that this was coming," Rep. Garcia said. "Again, I made my choice clear a couple days ago that the best option for the people in the 14th Ward to restore honesty and integrity is the candidacy of Tanya Patino. She will restore that to residents of that ward, a working class Ward. She will have no other interests. She is the future."

With Burke's political power and influence stretching far and wide in Chicago, Garcia said there may be other nervous people, worried about where the feds may be sniffing next.

"There are many people who have been allies and friends, who have benefitted from his padenismo, being their godfather for many years, I think a lot of folks won't sleep very well for the next few days," he said.

Inside City Hall Thursday afternoon, aldermanic officers were virtually empty. A few staffers could be seen inside Burke's third floor office, but none of them would comment on the charge against their boss.

Lightfoot released a statement saying, "Favors traded, deals cut, unethical conduct tipping into illegality-this is the toxic political brew that allowed Ed Burke to prosper. Chicagoans deserve answers as to how Ed Burke has been allowed to manipulate our political system for so long, and how any mayoral candidates have facilitated this corruption."

Enyia released a statement saying, in part, "Today's news of Ald. Ed Burke's indictment is a devastating reminder of Chicago's long history of corruption within city government. Any political leader who will willingly extort his community for personal gain is not only a predator but a major fissure to democracy and an inhibitor of justice."

Mayoral candidate Bill Daley released a statement, saying, "From the start of this campaign I have said that the 14th Ward needs new leadership. Today's charges just confirm it. We must all work together on obvious reforms to our local government."

Chico released a statement saying, in part, "Gery has known Ed Burke for three decades, and he's extremely disappointed. No one is above the law. While we will closely watch the case as it plays out in the court system, Gery obviously will not accept support from Ed Burke in the upcoming mayoral race."

Burke's wife, Anne Burke, is an Illinois Supreme Court justice. His brother, State Rep. Dan Burke, decided to resign on Dec. 30, a week before the end of his term. He served in Springfield for 28 years.

The alderman joins a long list of Chicago lawmakers charged criminally, including ex-Gov. Rod Blagojevich, who is serving a 14-year prison term for corruption.

Since the 1970s, nearly three dozen aldermen have been convicted. A common joke in Chicago is that so many aldermen had gone to prison that when they saw each other behind bars they'd holler, "Quorum call!"