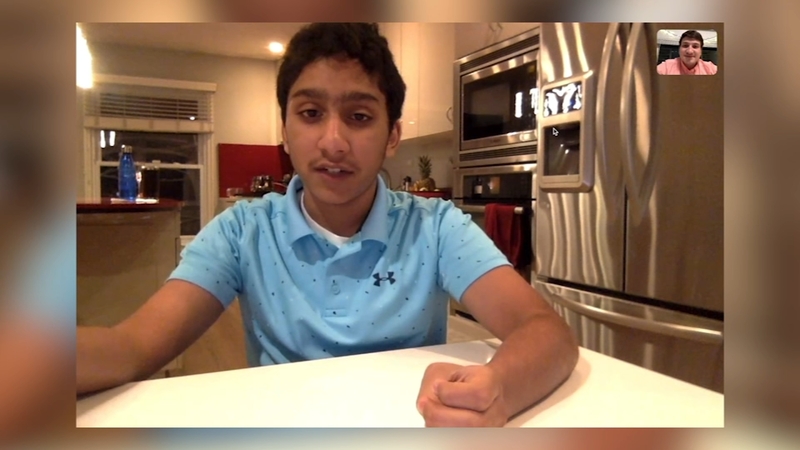 DUPAGE COUNTY (WLS) -- COVID-19 is forcing all students to stay inside for the foreseeable future, and the 3-time consecutive DuPage County spelling champion isn't wasting any time.

Atman Balakrishnan, 13, is studying for the 2020 Scripps National Spelling Bee.

"English is a very interesting language, in that it doesn't follow normal phonetics or any sort of rules," said Atman.

"It's a compilation of different origins from different countries that has accumulated over hundreds of years."

Scripps announced this week that the competition will be suspended, and that it will be rescheduled if possible.

For Atman, an 8th grader competing during his last year of eligibility, this year's spelling bee was a chance to follow in his father's footsteps.

Atman's father Balu Natarajan won the same regional spelling bee three consecutive times when he was in middle school in the 1980s. He went on to win the national championship in 1985.

"My way of expressing myself is through words," Natarajan said.

"My philosophy has always been, when I write something and I hand it to you or I send you an email even, the words should jump off the page and speak to you. Done the right way, words do exactly that."

Natarajan says his son is sticking to their intentional study plan, even with the recent news of postponement or potential cancellation.

"As far as Scripps (National Spelling Bee) and whether it's gonna happen ... that's something that obviously we're all a little worried about," Natarajan said.

"But this country obviously has much bigger issues to deal with right now."

Atman uses an etymological approach to studying. He learns roots and spellings in each language, then memorizes the exceptions to each rule.

The studying regiment involves regular scheduling from his mom, and tutoring help from parents, grandparents and his nanny.

This year, Atman won the county bee on the word, "traineau."

Younger brother Advaith isn't far behind either. The fifth-grader came in second place behind his brother during his first year of eligibility, and sees an opening for his own success next year.

"If (Atman) wasn't competing this year, I would have won. So I'm pretty confident," Advaith said.