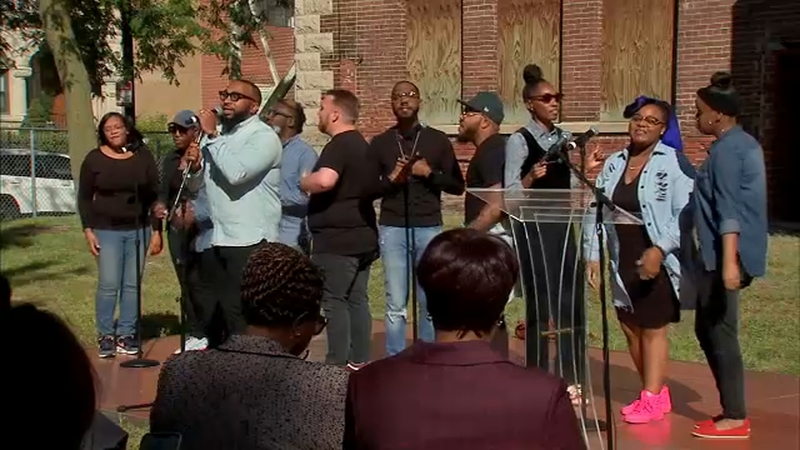 CHICAGO (WLS) -- Religious leaders in Chicago are gathering to bless the future home of the National Museum of Gospel Music as plans for its construction continue.

"It's pretty amazing that we get an opportunity to do something historic," said Pastor Chris Harris of the Bright Star Church of Chicago.

The Thursday morning consecration was attended by dozens of local and religious leaders.

It was held at the site of the museum's future location, which was once the home of Chicago's Pilgrim Baptist Church. The historic church on the city's South Side was destroyed by an accidental fire in 2006.

"It's very important to Pilgrim Baptist Church," said Cynthia Jones, the church's chairperson. "It's important to this whole community because this is what we need to heal our communities."

The push for the National Museum of Gospel Music is spearheaded by Don Jackson, who's the successful businessman behind the creation of the well-known Stellar Awards. The awards recognize achievements in the gospel music industry.

The 45,000-square-foot facility will be located at 33rd and Indiana Avenue in the city's historic Bronzeville neighborhood on Chicago's South Side.

"What we're trying to do at these different stages is to show the community, the ministers, that we're off and moving on the project," Jackson said.

Although it's unclear how much of the $50 million needed for the project has actually been secured, supporters said they've received $20 million in pledges from church memberships, along with local and state officials.

"We support the arts down in Springfield and this museum is considered as part of an arts program" said Democratic State Sen. Mattie Hunter. "So, I was instrumental in securing the first grant so they can get started on this project."

The day is ending with a free concert at Apostolic Faith Church, where Bishop Horace Smith is pastor.

"The gospel message and the gospel music is just indispensable," Smith said.