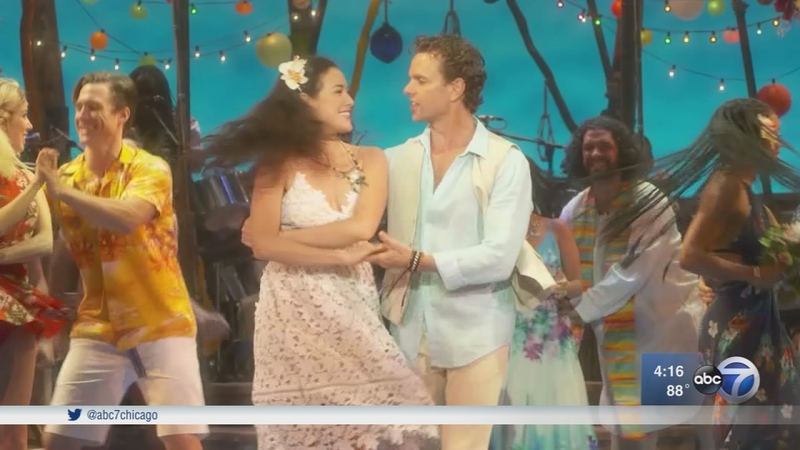 CHICAGO (WLS) -- Jimmy Buffett has been in Chicago performing for thousands of fans and gearing up for the new musical he'll be launching here in the fall.

It was escape to Wrigleyville for parrot heads this past weekend. And a special return to the Friendly Confines.

"We were the first band they let go into Wrigley Field 11 years ago, at the end of it when I was all done I was in the stands, I said if the Cubs ever win the World Series, I will come back and play Wrigley and they did!" Buffett said.

On Monday night, fans lined up around the block by Water Tower to hear Buffett talk about the pre-Broadway Chicago launch of his newest project - a musical based on his songs - "Escape to Margaritaville."

"This is a lifestyle that's been going on for 40 years, we're just putting it into a different form, people know these songs," Buffett said. "This is about escapism that I think is more probably needed today than before."

Broadway can be fickle, but it's not unfamiliar to Buffett.

"I've always been a great fan of musicals, and I've been going for years. As a live performer, audiences to me aren't any different, there's energy, there's recognition if you know how to work 'em," he said.

The 70-year-old troubadour is happy the show is here before New York, a city he loves.

"I got it down," he said. "I went down, I rode my bike down Lake Shore over to Lincoln Park and played tennis. I've been coming here for 30 years, so I've got a routine!"

Chicago's "Escape to Margaritaville" opens November 9 and, yes, there will be margaritas for sale in the lobby. Was there ever any doubt?

Jimmy Buffet is bringing his music to a Chicago stage in a whole new way this fall by providing the soundtrack to the new musical, "Escape to Margaritaville."

Jimmy Buffett is bringing his music to a Chicago stage in a whole new way this fall by providing the soundtrack to the new musical, "Escape to Margaritaville."

Buffett has sang about Margaritaville, but Chicago has been a favorite escape of his many times. He got stuck on the east coast and couldn't make the preview of the musical, but the show went on without him.
Once again, the pre-Broadway launch happened in Chicago. The show, "Escape to Margaritaville," features Buffett classics and new songs. It's the story about a bartender who falls in love with a tourist.

"Nobody enjoys the pleasures of the jokes and the music more than him, he's barefoot most of the time, in a Hawaiian shirt, this great, open spirited collaborator," said Ashley.
"There's just so much fun in these songs, you go see him in concert and the people are having a great time, they're dressed up, there's a sense of lightness," said Greg Garcia, one of the writers.