Elmhurst father, daughter struck by lightning on spring break: 'I thought my dad was dead'

'The next thing I knew I was flying out of my shoes and my ears were ringing,' Ashley Moberg says
WLS
By Tanja Babich, Michelle Gallardo and ABC7 Chicago Digital Team 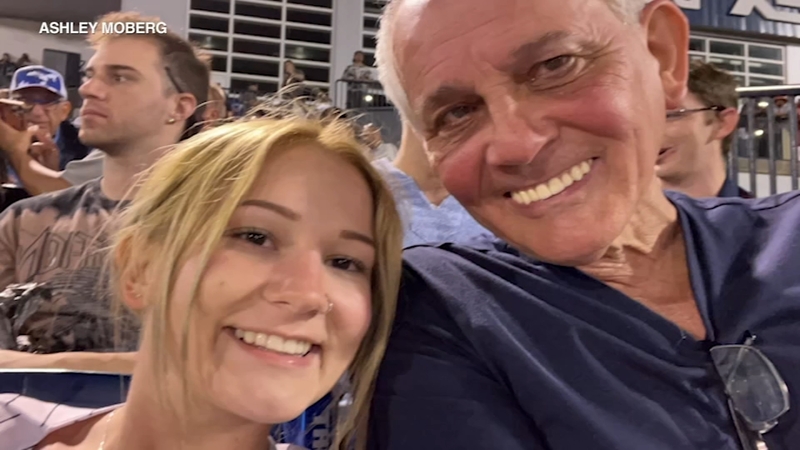 ELMHURST, Ill. (WLS) -- A father and daughter from Elmhurst were struck by lightning while on spring break in Tampa, Florida - and survived to Zoom about it.

Ashley Moberg and her father went to Florida to visit Disney World and catch a few Yankees spring training games.

But as they ran from a thunderstorm at Steinbrenner Field in Tampa on Saturday, their dream trip became a nightmare when they found themselves under a tree and unable to locate their car.

Ashley Moberg's necklace left a burn on her neck after she and her father were struck by lightning in Florida.

"There was a bright flash and a loud boom that I heard, and the next thing I knew I was flying out of my shoes and my ears were ringing," Ashley Moberg said. "I saw my dad hit his head on the ground, then I hit the ground. I thought my dad was dead for about 10 seconds there while I was lying on the pavement trying to figure out whether I had died."

Her father hit the ground, breaking his cheekbone. The necklace Ashley was wearing burned through her skin on the back of her neck.

SEE ALSO | Where are you safest from lightning?
EMBED More News Videos

"My dad was knocked unconscious so he doesn't remember most of it," Ashley Moberg said. "He has me doing all the talking."

"I wake up with my face in the mud, my feet laying in the parking lot and I cannot move anything," John Moberg recalled. "I can't even pick up my face out of the mud. I thought I had a stroke."
They said the moments that followed seemed to drag on forever.

"I was screaming out for help and I realized no one could hear me," Ashley Moberg said. "So I then was able to push myself up and crawl a little closer to my dad."

Within minutes the ambulance arrived and took them to Tampa General Hospital, where they spent the next couple of days under observation.

But they couldn't leave Florida without revisiting the site where it all happened, knowing they're lucky to be alive.

"Well, for everyone who's asking, yes, we got super powers and no, we're not allowed to talk about them," Ashley Moberg said.