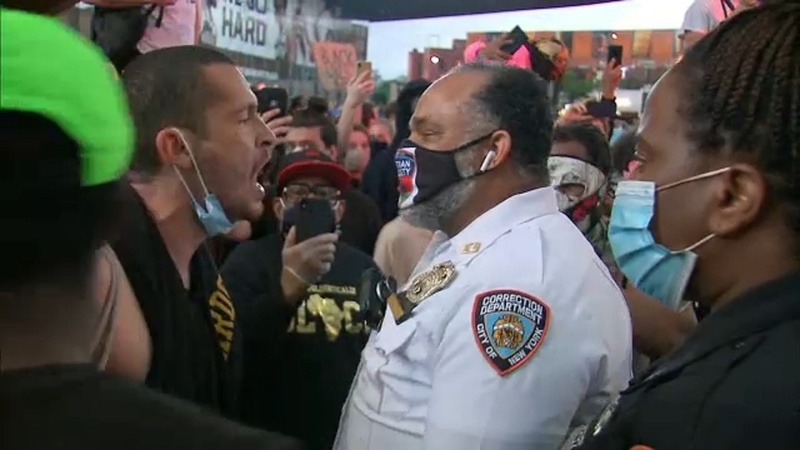 NEW YORK -- Protests in Brooklyn that started off peacefully Friday quickly turned violent, with a dozen NYPD officers injured and at least 200 arrests, police cars set ablaze and the door and windows of the 88th Precinct in Clinton Hill vandalized.

There were at least 500 protesters in front of the 88th Precinct. Protesters then tried to break into the 79th precinct in Bedford Stuyvesant, but were then arrested.

Earlier, demonstrators gathered in Foley Square in Manhattan for the second straight day of protests over the death of George Floyd, a black Minneapolis man who died in police custody.

"If you are angry with the government, if you're angry with the elected leaders...direct that anger to all of us -- but the police officer in front of you is a working man or woman just trying to do their job," said Mayor Bill de Blasio.

In Brooklyn, many protesters were pepper sprayed and tackled by police at Fort Greene Park. Bricks were being thrown and windows shattered. There were confrontations as well earlier at the Barclays Center. Police say 125 people were arrested for throwing bottles.

#BREAKING: officer injured, others hit with pepper spray, amid scores of arrests that continue at this hour at #BarclaysCenter #abc7ny #GeorgeFloyd pic.twitter.com/iHv9R1BUqp

The Foley Square rally started Friday at 4 p.m., on the same day authorities in Minnesota announced that the officer who knelt on George Floyd had been arrested.

The protest then made its way to the Manhattan DA's office, and to the foot of the Brooklyn Bridge.

On Thursday, angry protesters defied the city's prohibition on public gatherings and staged a chaotic rally that started in Union Square and spread through Lower Manhattan through the night.

There were some extremely emotional moments for protesters, who faced off with officers enforcing social distancing rules.

Jim Dolan has more on the protests that broke out in NYC following the violent arrest death of George Floyd.

The NYPD says 72 of them were either arrested or summonsed, many for not maintaining social distance.

Two officers were hospitalized for concussions, one after he was struck by a flying garbage can, and another who was thrown to ground and briefly knocked out.

Police officers armed with night sticks could be seen during protests that turned violent in Brooklyn on Friday night. (Credit: KarlMunstedt/Twitter)

Five were charged with felony assaults on police officers. 33 were arrested for misdemeanors, ranging from obstructing governmental administration to resisting arrest. And 34 others were cited for various violations, including disorderly conduct for blocking streets.

A third officer, an inspector, was punched in the face but not seriously injured.
EMBED More News Videos

Dozens of protesters were arrested in NYC as they protested the death of George Floyd.

That was broken up, and the protest then picked up at Foley Square, where Friday's rally is taking place.
Gwen Carr, whose son Eric Garner died while in police custody, is expected to attend.

"This is just opening up an old wound and pouring salt into it," Carr said on Thursday. "The police officers come into our neighborhoods to brutalize, terrorize, and murder our children, and we have done nothing."
RELATED | 'I can't breathe': George Floyd's death draws comparisons to Eric Garner case
EMBED More News Videos

The Minneapolis arrest incident immediately drew comparisons to the case of Eric Garner.

The mayor of Minneapolis has called for criminal charges against the white police officer seen on video kneeling against the neck of the handcuffed black man who complained that he could not breathe and died in police custody.

Based on the video, Mayor Jacob Frey said officer Derek Chauvin should be charged in the death of George Floyd. The footage recorded by a bystander shows Chauvin with his knee on Floyd's neck as Floyd gasps for breath on the ground with his face against the pavement. The officer does not move for at least eight minutes, even after Floyd stops speaking and moving.
NYC Mayor Bill de Blasio said if Floyd was white, he would be alive right now.

I’ve seen the video. I am horrified. George Floyd was murdered in broad daylight and the man who killed him was a police officer — and that officer didn't seem to care at all that he was taking a man's life.

If George was white, he would be alive right now.

At least two of the officers involved in Floyd's arrest have been investigated for previous violent incidents.