Chicago crime statistics show shootings, murders up 50% in 2020; 2 shot by stray gunfire in South Chicago in first shooting of 2021
WLS
By Jessica D'Onofrio and Craig Wall
CHICAGO (WLS) -- 2020 was a very deadly year in Cook County.

While the pandemic took a heavy toll, COVID-19 is also being blamed for contributing to a record high number of deaths due to gun violence.

At 18-years-old, Nasee Minniefield just graduated from high school and had his whole life ahead of him, until he was shot and killed on Halloween.

According to the Cook County Medical Examiner's office, Minniefield was one of 875 people who died from gun violence last year; 78% of the victims were Black.

"That is by far the highest total of gun-related homicides we have ever had. The only time we came anywhere near that was in 1994 when we had 838 homicides due to gun violence," said Natalia Derevyanny, Spokeswoman for the Cook County Medical Examiner's office.

"I see so many on TV and I've watched so many innocent children -- kids get killed and I never would have dreamed a day in my life that I would feel the pain that they feel," Minniefield said.

Gun violence deaths were not the only record-breaker for the year. Cook County also recorded a total of 16,049 deaths in 2020, which was also a record.

Those numbers were driven up by the 8,192 lives lost due to COVID-19 infection deaths.

Pandemic stress is also considered a contributing factor to the number of homicides during the unprecedented year.

Chicago police also released the final crime number for 2020 Friday which showed that shootings and murders jumped up by more than 50% in 2020. 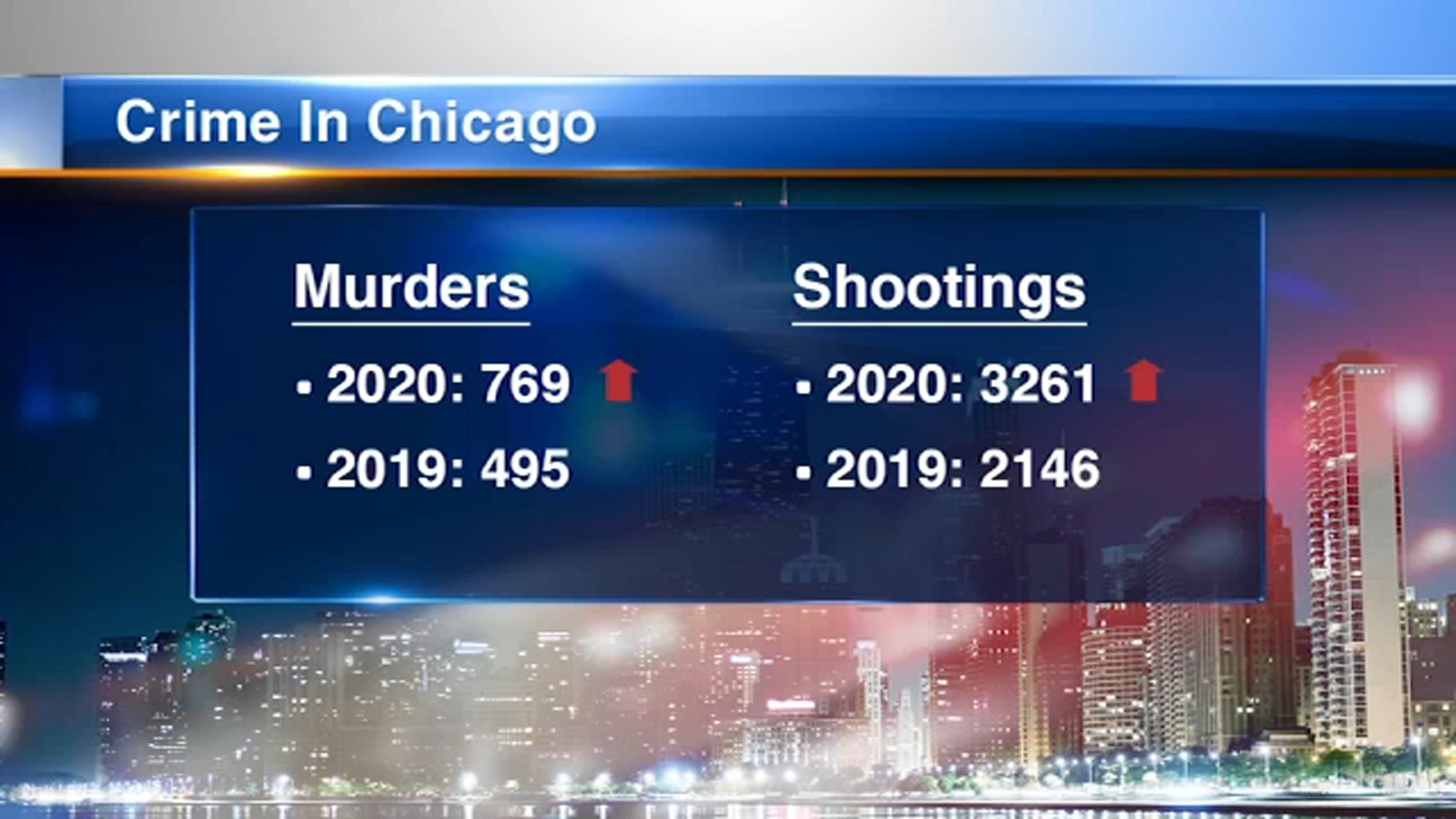 This illustrating a skyrocketing year for violence after three years of progress where many innocent children were killed and some police also became targets of gunfire.

Nearly a quarter of the murders happened on the West Side.

City leaders and a new Chicago police superintendent were forced to tackle civil unrest amidst the COVID-19 pandemic, implementing several community policing strategies amongst other tactics. But police say overall crime is down.

A couple was shot shortly after ringing in the New Year as Chicago police say murders and shootings were up by 50% in 2020.

Police Superintendent David Brown is promising to make improvements when it comes to building up community partnerships and strengthening investigations.

"I think our savior is going to be the COVID vaccination," Dr. Faran Bokhari, Chief of Trauma at Cook County Hospital. "I think people are so tired of being indoors and not being able to do what they usually do."

Another sobering statistic is the all-time high number of deaths from opioid overdoses reported by the Cook County Medical Examiner's office. According to the ME, there are 1,599 confirmed cases so far, and potentially as many as 500 more pending toxicology results.

But behind all the statistics, there are real families who have lost loved ones and who are hurting. These families carry the pain of 2020 into the new year as they hope for healing.

Two people were hit by stray gunfire just after they rang in the New Year.

At around 12 minutes past midnight, Chicago police said a man and a woman were sitting in the living room of a home when shots were fired from outside striking them.

The shooting occurred in the 8700-block of South Buffalo Avenue in the South Chicago neighborhood.

The 51-year-old man is now in critical condition with a gunshot wound to his head and a 51-year-old woman has a graze wound to her head. No one is in custody.

A 41-year-old man was killed in Chicago's first homicide of the new year.

A 41-year-old man was killed in Chicago's first homicide of the new year.

Police said he was driving near 47th and King Drive in the city's Bronzeville neighborhood overnight when someone began shooting.

The man was shot in the neck and crashed his car.

Friday morning, Superintendent Brown issued a statement saying:
"2020 has been a perfect storm.

Public safety is an all-hands-on-deck effort that requires not only the police, but street outreach workers, faith leaders, the courts, community organizations, and residents all working together. The criminal justice ecosystem, however, was profoundly impacted and disrupted by the global coronavirus pandemic and the death of George Floyd.

The increase in fatal shootings and homicides is not unique to Chicago, as many major city chiefs and law enforcement executives are grappling with unprecedented levels of violence throughout the nation. Our Chicago Police officers faced an unprecedented set of circumstances in contending with a spike in violent crime, made even more difficult by having to contend with a health pandemic while facing extended periods of heightened civil unrest and looting.

As the rest of our city and nation grappled with a global pandemic, the Chicago Police Department also recorded over 2,450 confirmed cases of COVID-19 throughout the Department. Sadly, four of our CPD officers succumbed to COVID-related illnesses.

Over the summer, we pivoted our crimefighting strategy to a citywide approach toward deploying resources to areas experiencing high levels of violence. This strategic shift has had a positive impact on public safety and has decreased the pace of monthly murders that had accelerated during the first half of 2020. We've also dedicated more resources that will bolster our narcotics investigations into mid-level and upper-level drug dealers, who have proven to serve as major drivers of violence.

The best way to reduce crime and violence is to prevent it from happening in the first place by building bridges and trust in the community. Community engagement has become a central component of our public safety approach at the unit level, from the Detective Bureau to the citywide Community Safety Teams and Critical Incident Response Teams. This includes the Rollin' Rec events conducted over the summer in partnership with the Chicago Parks District, along with the upcoming launch of the Police Athletic and Arts League in 2021. We also expanded the Neighborhood Policing Initiative from two to five districts this past summer and will expand into additional districts in 2021.

As we close a tumultuous year and prepare for 2021, our Department's vision for a safer Chicago will be rooted in a five-pillar strategy for strategic change: Growing Community Trust, Transformational Change through Reform, Officer Wellness, Ensuring Public Safety and Strengthening Investigations.

The Chicago Police Department has a moral obligation to respect the dignity and sanctity of human life. That dignity and respect must be reflected throughout every aspect of how we function and must permeate every aspect of our organizational culture.

Lastly, I want to say how proud I am to be associated with the men and women of the Chicago Police Department. No matter the hardship, no matter the danger, they continue to report to duty every day and night to serve and protect this great city."
Report a correction or typo
Related topics:
chicagosouth chicagocook countycrimechicago shootingmurdercoronavirus deathschicago crimeoverdosecoronavirus chicagocoronavirus pandemicpandemiccovid 19 pandemicchicago police departmentdeath investigation
Copyright © 2021 WLS-TV. All Rights Reserved.
More Videos
From CNN Newsource affiliates
TOP STORIES