COVID vaccine: Chicago will open vaccinations to everyone 16 and older by April 19, Lightfoot says 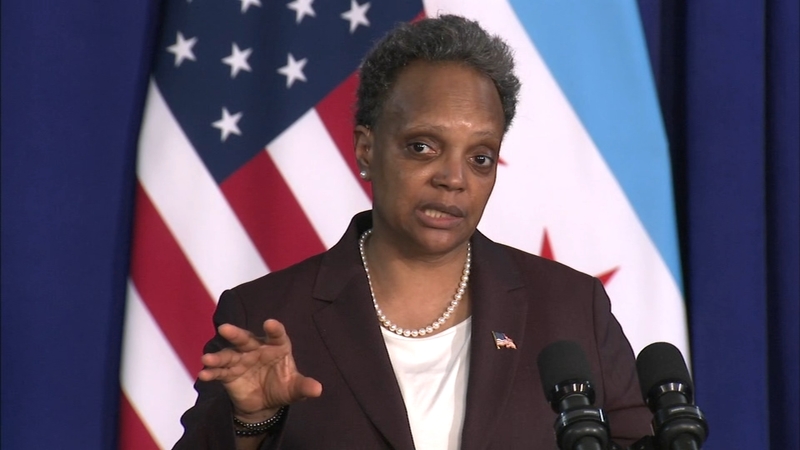 Chicago will open vaccinations to all adults by April 19, Lightfoot says

CHICAGO (WLS) -- Chicago will meet President Biden's goal of making the COVID-19 vaccine available to everyone over the age of 16 by April 19, Mayor Lori Lightfoot announced Tuesday.

In parts of Illinois, that age group will have access to the vaccine even earlier on April 12.

Lightfoot's announcement came shortly after meeting with VP Kamala Harris, who was visiting Chicago in her official capacity for the first time.

The Biden administration also made it clear that they want states to open up vaccine access to all adults by April 19 at the latest.

Illinois had already announced that it would do just that starting next Monday, April 12. But the City of Chicago, which gets its supply directly from the federal government, had previously been hesitant to commit to that move, stating that May 1st might be a more realistic objective.

However, Lightfoot said the city will meet the federal government's new deadline, but she made it clear they need more supply to make that happen.

"We do want to be aligned with the president's objective, but understanding that we need more vaccine," Lightfoot said. "And I want to make it clear that when we open up on April 19th, that doesn't meant that day everyone is going to get access to the vaccine."

"We're seeing cases in younger people - we absolutely follow the data, we follow the science - and it's about wanting to make shifts where we're able to," said Dr. Allison Arwady, Commissioner, Chicago Dept. of Public Health. "And so I do think it's the right thing from a science perspective."

Nearly half of the new cases diagnosed in Chicago are currently in people under the age of 30. However, Arwady said that hospitalizations and ICU admissions remain stable as more seniors and more have been vaccinated.

But even as they remain the priority, there is certainly now a clear shift to simply wanting to get vaccines into as many arms as possible, across all age groups and populations.
Report a correction or typo
Related topics:
health & fitnesschicagoloopvaccineslori lightfootcoronavirus chicagocoronaviruscoronavirus illinoiscovid 19 vaccinecoronavirus pandemicjoe bidencoronavirus testcovid 19 pandemiccovid 19coronavirus testingkamala harris
Copyright © 2021 WLS-TV. All Rights Reserved.
CORONAVIRUS CHICAGO