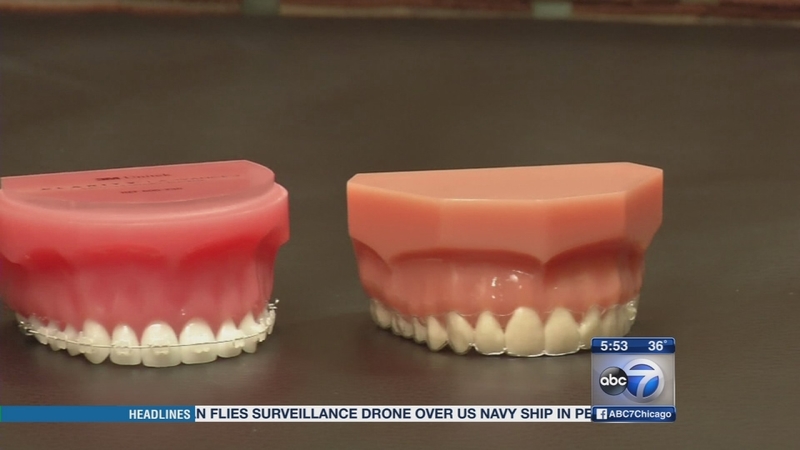 When you think of the typical patient in an orthodontist's office, an awkward middle schooler comes to mind.

But the typical face of braces is changing, and getting older. Adults are seeking dental perfection in record numbers.

Felicia Baldwin, 81, has a lot of reasons to smile - and her age is only one of them.

"I'm in a dance group, so you have to be able to smile. And I was getting very self-conscious about smiling," Baldwin said.

In Baldwin's Rockettes-style dance troupe, the straighter the kick the better, but straight teeth and a winning smile are just as essential.

So Baldwin joined more than a million other adults this year and made an appointment with an orthodontist.

"Many of these folks had children, they provided orthodontic care for them, paid for it, now they're ready to do something for themselves," said Tate H. Jackson, DDS, MS, Asst. Prof. of Orthodontics, UNC Chapel Hill School of Dentistry.

Lately, a third of the patients in Jackson's office are adults. They're attracted to discreet options like clear aligners and back-of-the-teeth braces.

But once in a while a patient like Annmarie Heffernan says "bring on the tinsel grin jokes."

"Here I am 52 with braces and I did all the funky colors. So, green, never do because it looks like, they're like, 'You have something in your teeth,'" Heffernan said.

Jackson says adults face challenges that kids do not. Decades of dental work, like fillings, root canals and crowns can make it tough to achieve pearly perfection.

"Sometimes because the jaws aren't growing we're just a little more limited in how far we can actually move the teeth," Jackson said.

But for Heffernan, the added self-confidence made two years with braces worth it. Baldwin has eight months to go and can't wait for the last band to come out.

Before adults can get braces, they have to make sure their teeth are free of cavities and gum disease. It can set you back between $3,000-$7,000, and typically medical insurance won't cover the cost of braces unless you have a medical reason for needing them; dental insurance will often cover some of the cost. But both women saved money by going to a dental school.

BACKGROUND: Braces used to be just for teens, but lately one out of five people taking a seat in the orthodontic chair are adults. The number of adult orthodontic patients increased 14 percent from 2010 to 2012, to a record high of 1,225,850 patients. As of 2012, 44 percent of adult patients were male, a 29 percent increase from 2010. A study by Wakefield researchers found that people generally equate social and professional success with an attractive smile. More than one third of respondents who reported being
unhappy with their smiles believed that their social life would improve with better teeth along with their love life and job. Another factor contributing to the increase in orthodontic patients are discreet options like insivalign and back-of-the-teeth braces.
(Source: http://www.sabariortho.com/docs/2012%20AAO%20Patient%20Census%20Survey.pdf)

HALL OF FAME: In an effort to call more attention to the fact that adults are seeking orthodontic treatment at historic levels, the American Association of Orthodontists started an AAO Adult Hall of Fame last year. The honorees all have different reasons for going with the tinsel grin. They include: a private jet pilot who realized that her smile is the first thing that greets the high profile passengers she ferries around the country, a former opera singer in Chicago whose overbite and unusually small jaw impacted the quality of her singing voice, and a cookbook author who realized that even though she had treatment as an adolescent, her teeth had shifted because she did not wear her retainers.
(Source: https://www.aaoinfo.org/news/2015/11/aao-seeks-patients-adult-hall-fame#sthash.UD77zXTi.dpuf)

HISTORY: Even before George Washington's famous wooden teeth people were thinking of ways to achieve dental perfection. We're talking as far back as 400 BC! Archaeologists have discovered many ancient mummies with what appear to be crude metal bands wrapped around their teeth. They think they used something called catgut - a type of cord made from animal intestines - as orthodontal wires. The first documented ligature wire was found in a Roman tomb in Egypt wrapped around teeth. Even though perfect teeth have clearly been on people's minds for centuries, orthodontics didn't really make any great advancements until the 1700s. French dentist Pierre Fauchard is often considered the founder of modern orthodontics. In 1782 he published a book titled "The Surgeon Dentist" on methods of straightening teeth. He used a device called a "Bandeau", a horseshoe-shaped piece of iron that helped expand the arch. Since then the practice continued to evolve over the years; the wire crib was developed in 1819 and rubber bands from rubber tubing were first tried in 1850.
(Source: https://www.aaoinfo.org/sites/default/files/default_images/WahlHistoryAJO-DOChapter1.pdf)