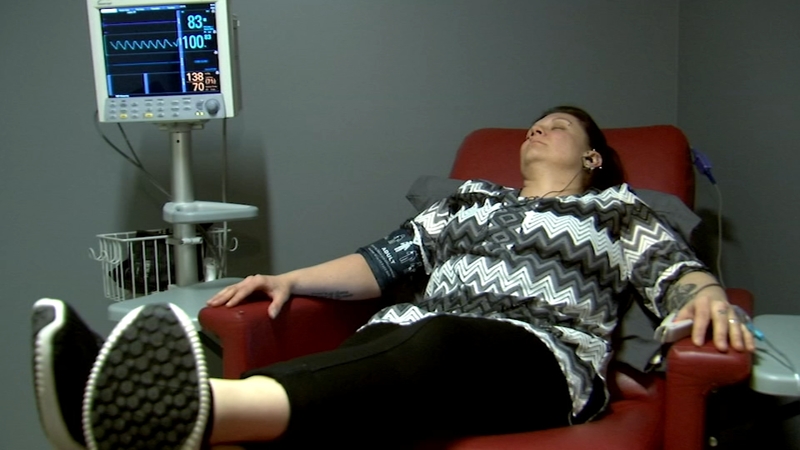 Ketamine has been hailed as a breakthrough treatment for depression and other disorders. The drug was also in the spotlight this week as medics revealed its key role in the harrowing rescue of a Thai soccer team trapped in a cave last year.

But ketamine's history as an illicit, trippy party drug has some concerned about potential abuse.

The Food and Drug Administration recently approved one version of this treatment while a rapidly growing cottage industry of ketamine infusion clinics still operate with little oversight.

Some scientists would like patients and practitioners to hold off until there is more robust research about the medication's long term effects.

But Kimberley Curda, who receives ketamine treatments, said patients who are desperate for help don't have that much time left.

"Suicidal thoughts are in my head all the time," she said. "Not like I'm planning, but more like it's a way out."

Sanin has tried antidepressants, behavioral therapy and more throughout her yearslong battle with severe depression -- with little to no success. She explained there were many mornings she would wake up angry about having to face a whole new day. She said it was frustrating not to be able to appreciate her wonderful family and the good life she had.

When she heard a commercial about ketamine infusions for severe depression, she felt as if it might be her last chance.

"For someone who's hit rock bottom, there is no more waiting," she said.

WATCH: 'It did for me in 45 minutes what years couldn't do' - Joanne Sanin discusses ketamine infusions
EMBED More News Videos

Intravenous ketamine is now offering a lifeline to patients like Sanin.

The effects are sometimes felt within hours: The drug produces a dissociative state, which patients describe as feeling as if they are floating.

This effect made a powder form of ketamine popular in the psychedelic drug scene in the 1990s. Prior to that, the drug had been used as an animal tranquilizer in the 1960s and as an effective anesthetic for humans in the 1970s.

More recently, some doctors have been giving ketamine to people without formal FDA approval.

An estimated 150 ketamine clinics are in operation across the country, including at least a half dozen around the Chicago area.

Khare is board certified in emergency medicine and said he uses evidence-based medicine and guidelines to decide the dosing of ketamine for each individual patient.

"So our protocol is you get an infusion of ketamine every other day for two weeks -- so six infusions -- and then we do it monthly," Khare said.

Curda is one of his patients and feels the treatments are working.

"I've noticed that I'm reacting to life differently. I'm handling situations differently. I don't wake up feeling like I shouldn't be here," she said.

Availability of this treatment is increasing with the Food and Drug Administration's recent approval of a nasal spray treatment that contains a chemical cousin of ketamine. The brand name is Spravato but it is chemically knows as Esketamine.

The new drug has been approved as a fast-acting treatment for patients who have failed to find relief with at least two traditional antidepressants and will only be available through a system of tight distribution and monitoring.

Up to 7.4 million American adults suffer from so-called "treatment resistant depression," which heightens the risk of suicide, hospitalization and other serious harm, according to the FDA.

Intravenous ketamine is a generic and is used "off label" for depression and other disorders, meaning it's not formally approved for that use by the FDA. Off-label use often means less regulatory oversight, as is the case with many other medications.

Spravato will cost between $590-885 depending on the dosage and before various insurance discounts and rebates.

Patients often pay hundreds of thousands of dollars for intravenous infusions of the drug over several weeks or months. These therapies are generally not covered by insurance because they haven't been approved as safe and effective by FDA regulators.
Dr. Mark Rasenick has been studying the effects of ketamine at the University of Illinois Medical Center for years. He called the drug "revolutionary," but said he still has his concerns.

"It's still a dangerous drug and we have no idea what the ramifications of long term use are," Rasenick said.

Rasenick said ketamine seems to be safe and effective for treating depression in the short term, but he's concerned about the lack of oversight of intravenous clinics, especially as the potential for abuse of ketamine is very high. He's pushing for more rigorous studies and less hype.

Chicago Customs and Border Protection officers say they are still snagging illegal ketamine, a fair amount of which comes to the Chicago area from the Netherlands.

U.S. drug enforcement officials told the I-Team their agents are gearing up for the summer concert season where street ketamine typically makes a return. Officials had no predictions whether the growing popularity in clinics would influence illicit sales in Chicago.

Still, some addiction specialists predict the demand for inexpensive street ketamine will increase because it's much cheaper compared to the medications given by doctors.

Dr. Indra Cidambi, an addiction specialist and medical director of the Center for Network Therapy in New Jersey, says the medication given in clinics is low dose and has less potential for abuse. Cidambi does worry, however, that demand for inexpensive street ketamine could be driven up if treatments in a proper clinic are too expensive or inaccessible.

"The black market price is $10 for 10 milligrams. We cannot forget that," she said. "They don't know what dose they are getting on the streets and that's also a concern. That can be cut with heroin and or fentanyl, that can cost life right now," Cidambi said.

Chicago anesthesiologist Dr. Bal Nandra is the founder of IV Solution, an infusion clinic that's been operating for two years in Chicago's Near North Side neighborhood. He said the drug has a very safe profile if administered appropriately by someone with the appropriate training and expertise. He also does not expect street use of ketamine to increase as it's not addictive like opioids.

Ketamine can stimulate the sympathetic nervous system and increase heart rate and blood pressure so physicians administering the drug need to be able to handle any issues that could arise during treatment, Nandra said.

Sanin is his patient.

"In four days they did for me what I've been trying to do for over 20 years. It's amazing," she said.