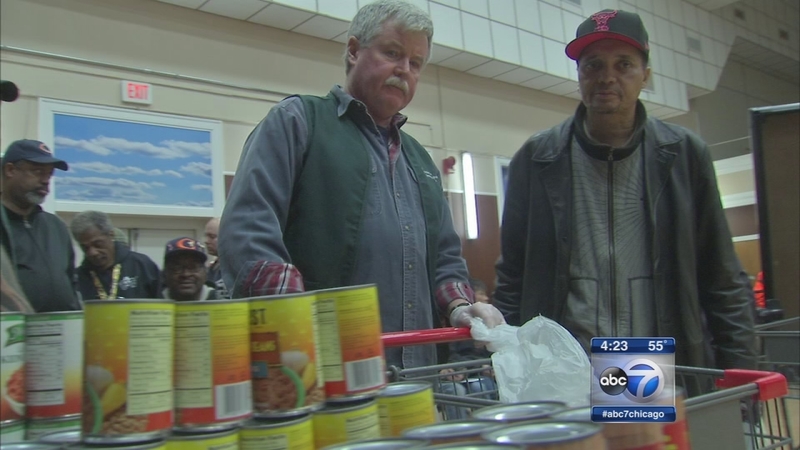 CHICAGO (WLS) -- The Greater Chicago Food Depository is one of the only food banks in the country to operate a food pantry at a veterans' facility.

When the Greater Chicago Food Depository opened a food pantry at the Edward Hines Veterans Administration late last year, they know there was a dire need. As times get tougher, veterans say they need the help now more than ever.

Here at the Hines VA, many of these men and women have injuries seen and unseen. Yet, they all say medical care is not the only assistance they need.

The Greater Chicago Food Depository opened an on-site food pantry in 2014 as a direct response to calls for help.

"Here in Cook County, there are over 60,000 veterans that live below the poverty line. The Hunger in America study told us that 18 percent of the households that access the food depository's network has at least one current or retired member of the U.S. armed forces," said Emily Daniels, Greater Chicago Food Depository.

For some veterans, the food they receive here meets a critical need.

For others, it's one more way to leave no soldier behind.

"Mostly I do it because I have a friend, he's a Korean veteran, and he can't get around. His car burned down last year and so we're helping him out," said Stefan Cipot, 101st.

And at a time where many veterans say they feel forgotten, it's a reminder that they are appreciated.

The Greater Chicago Food Depository also operates a pantry at the Jesse Brown VA Hospital. Between the two locations, they feed about 3,000 veterans each month.

If you would like to make a donation or learn other ways to give back to the food depository or to the Northern Illinois Food Bank, click here to learn how to help.